There is a genre of landscape painting from the 17th and 18th centuries that ought to give us cause for reflection. They are paintings of Italian landscapes where goatherds and their flocks wander amongst the ruins of Roman aqueducts, bridges and temples. The fascinating thing about them is that they depict a European society which, more than 1200 years after the fall of the Roman empire, still had not regained the level of production and infrastructure that the Roman empire had at it’s height.  It wasn’t until the industrial revolution in the 18th century that the productivity and infrastructure in Europe managed to surpass the Roman empire in its heyday.

This article by Pål Steigan was originally published here. Translated by Graham Healey.

The paintings of goatherds and farm animals amongst the ruins of infrastructure and temples from classical Rome are like pictures of people moving among the remains of a high-tech civilisation that they no longer have the ability to match. The city of Rome had at its height a population of a million people. That required a very advanced infrastructure for water and food supply, transport, goods delivery, trade and so on. The city was, at the time, the foremost example of a building materials industry, that had the capacity, and level of competency, to deliver the enormous amount of building materials that such a city required.

When the empire collapsed, the infrastructure was no longer maintained. The aqueducts broke down and towns and cities lost their water supply. Roads and bridges deteriorated and were not repaired. Goods transport and trade was reduced from a surging river to a quiet brook. 1200 years after its days of glory Rome was a ruined town with a population of less than 10.000.

The Etruscans, and later the Romans, had drained swamps to increase food production. Thereby they also removed malaria. But when the empire broke down, the drainage ditches were no longer maintained and malaria returned. It wasn’t until the 1930’s, after the fascists came to power, that the swamps were drained again and malaria disappeared from Italy again. 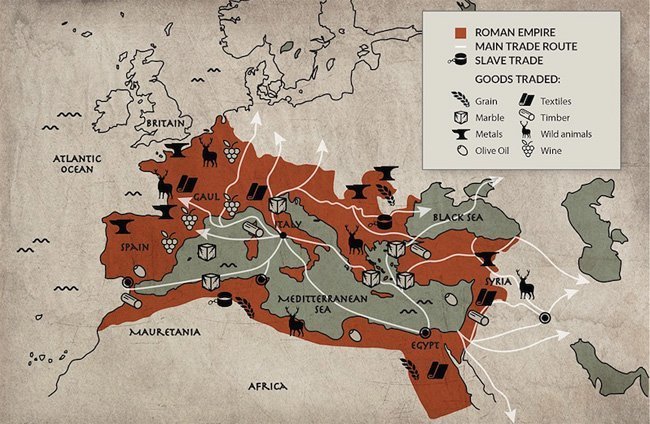 The ’empire’ of today is extremely vulnerable

We, who live in a a time when another empire shows many of the same tendencies towards disintegration that the Roman empire had towards the end, have all reason to give it some thought.

The Roman emperors mixed more and more lead in the silver coinage (denarius), so that eventually there was almost  no silver left. That was the hyperinflation of the time. Roman citizens no longer wished to fight in the army, so the army became based on mercenaries. The word soldier comes from this. A soldier was someone who received money to fight (solidus – gold coin). In order to pay the soldiers more money had to be minted. The empire’s wars were expensive and the empire was large, so the problem was solved by minting coins that were ever more worthless.

The world is dominated today by the American empire. It affects everything about global production, the money system, world trade, agriculture, the energy system and so on.

The empire passed it’s high watermark around 1971. That is when USA gave up the gold standard. After that the empire’s growth was built on printing more and more paper money, and now digital money. But the empire is also based on the rest of the world accepting these symbols as the real thing. US wars in the 21st century are largely financed by selling American government securities to China, in other words on China lending money to the American state.

When the so-called horse-meat scandal broke in 2013 the Financial Times showed how the European trade and transport systems for meat work.

Slaughterhouses are capital intensive and energy demanding, and therefore there are fewer and fewer slaughterhouses delivering to a more and more global market. The margins are paper thin, so they cut corners wherever they can.

The big supermarket chains want to buy the cheapest food raw materials available at any one time. Their brokers are continually on the phone to make best wholesale purchases. FT quotes professor Karel Williams at the Manchester Business School, who explains how refrigerator trucks queue up in front of the slaughterhouses in the Netherlands at the end of the week, with the drivers having no idea where they are going until the last minute. Each broker has 10-20 slaughterhouses he buys from. One week he buys from one place and the next week from somewhere else. The deals are made at the last moment for the driver to get his delivery orders. “We have a continual European trade where animal parts are driven around in 40-ton trailers.”

FAO (Food and Agriculture Organisation – UN) says that there are something like a quarter of a million edible plants that could be cultivated. But humanity has become dependent on just 3% of them.

The worlds food supply is dependent on 150 plant species. Three quarters of all energy we get from plant food comes from just 12 of them. Competition and the need to increase production has resulted in a drastic reduction in genetic diversity. The system also demands more and more energy, minerals and rare raw materials at an exponentially increasing rate.

This makes today’s empire extremely vulnerable. Agriculture may well experience crises similar to the Potato Famine that hit Ireland in 1847, when a million people died of starvation. It is easy to imagine how devastating and dramatic it will be.

In short: when this system collapses, it will, just as in the Rome empire, experience the collapse of much of the critical infrastructure. It will simply not be possible to feed as many people as before. The result can be widespread starvation disasters to an extent that humanity has never seen before. There are 37 megacities in the world today and the largest of them have over 30 million inhabitants. If there is a breakdown in water supply, or energy or food delivery, then such cities will become uninhabitable.

Food and water are fundamental. Without food and water we cannot live. But many of our systems are also extremely dependent on oil and rare earth minerals that there are less and less of. When this system collapses, it could easily have dramatic consequences. The example of the Roman empire shows that it might well take a long time before anything else takes its place.

It is easy to show that today’s growth based capitalism is living on borrowed time. It is a long way from being robust or sustainable. On the contrary it is very vulnerable and unstable. This is one of the reasons that it is necessary to work towards replacing the system as soon as possible and learning how to run society in a healthier and more sustainable fashion.

Globalists of right and left bemoan the fact that people turning their back on the globalism they have preached for decades. They are turning instead to populist politics and are so “reactionary” that they want to preserve their nation states, local production and more. But it is the globalists who are playing Russian roulette. It is their system that has made us so extremely vulnerable. To ensure food-security and viable local communities, to restore the broken metabolism between society and nature, is what is truly progressive. That is the future, and we need to urgently get rid of the empire and it’s economy of spongers and freeloaders.

If we don’t then perhaps landscape painters in a few hundred years time will be painting goat-herders grazing their animals under the twisted remains of skyscrapers and motorway bridges.