Guidelines for deception and fraud/hoax

Is this something I merely claim to be true? Far from; the opening to this article is found in the manual for The United States (US) Army Psychological Operations (PSYOP) doctrine currently in force. The document can be downloaded here (pdf). The manual opens as follows:

PSYOP are planned operations that convey selected information and indicators to foreign target audiences (TAs) to influence their emotions, motives, objective reasoning, and ultimately, the behavior of foreign governments, organizations, groups, and individuals. The purpose of all PSYOP is to create in neutral, friendly, or hostile foreign groups the emotions, attitudes, or desired behavior that support the achievement of U.S. national objectives and the military mission. In doing so, PSYOP influence not only policy and decisions, but also the ability to govern, the ability to command, the will to fight, the will to obey, and the will to support.

The US Army isn’t exceptional. Psychological warfare is ancient as warfare itself. I examined this in the article “The art of storytelling in times of war”. The American manual quotes the German military theorist Carl von Clausewitz, who wrote that “In war everything is intertwined with psychological forces and effects” in his most notable work “On War”.

All military commands of any significance practice psychological warfare as part of their arsenal, but fortunately the US Joint Chiefs of Staff mapped out the guidelines in a manual which is available for everyone to read. And it spells out that deceits, misleads and false narratives are part of the standard methods. For deceit to work it must appear trustworthy and it must derive from sources the target group has confidence in. All of this is discussed in the manual. It’s part of standard procedures that the commanding officer should consider whether a “deception story” needs to be created. 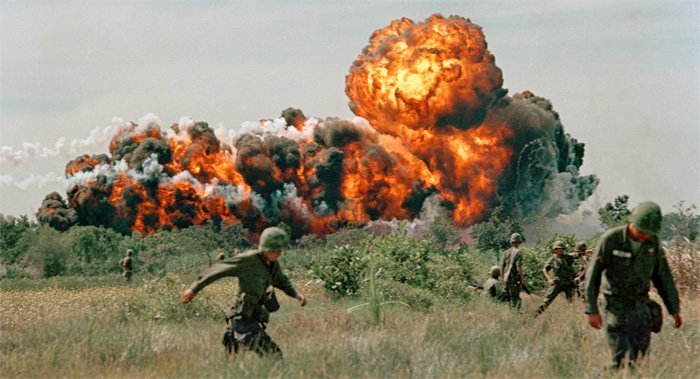 Such a deception story is the narrative of the Gulf of Tonkin Incident. A story was released from the US Joint Chiefs of Staff that the North Vietnamese navy had attacked US marine vessels in international waters. This lead to President Lyndon B Johnson’s appearance on national television, stating that the USA would strike back at North Vietnam. The problem is that the whole story is a hoax and it was known to be false. US Naval Institute writes this on their Internet homepage:

… once-classified documents and tapes released in the past several years, combined with previously uncovered facts, make clear that high government officials distorted facts and deceived the American public about events that led to full U.S. involvement in the Vietnam War.

Eleven years later the defeat of the USA was a fact. The Vietnam War had then killed possibly as many as 3.8 million people and caused three countries nearly irreparable damages. Millions of others were wounded and damaged for life. People are still dying from the poison USA poured down from their aircrafts. USA’s own losses were 58.000 killed and 303.000 wounded. And the whole thing started with a false narrative.

The truth and the permanent war

Since George W Bush declared the war on terror in 2001 the world has been in a permanent state of war where the war theatres have changed from Afghanistan and Iraq to Libya, Ukraine, Yemen and Syria. All these wars have been motivated by false narratives and in part tear dripping stories with the aim of influencing people’s emotions and positions, as described in the manual, in order to make them support the wars. One of the most famous – or rather; infamous – was Colin Powell’s speech in the UN in 2003 where he presented no less than propaganda lies about Iraq.

Lawrence Wilkerson, former Pentagon Chief of Staff, was one of the writers behind the speech, which presented false information about the so called weapons of mass destruction. Which again lead to the disastrous war on Iraq. Wilkerson is aware of the forgery that took place, and today he refers to this as «probably the biggest mistake of my life».

As the saying goes: In war, truth is the first casualty. And this has been proved over and over again during the years of this new century. Norway’s war on Libya, which the whole Parliament supported, and which destroyed that country, was, as is well known, built on lies that Moammar al Gadaffi was about to kill his own people.

In her tenure as Secretary of State, Hillary Clinton took over the baton from Bush and Powell. During her leadership, psychological warfare, now referred to as “soft power”, was developed several steps further. The US State Department specialized in delivering the message via the so called Non-Governmental Organizations (NGO), and the message was often styled in a “feminist” or “progressive” fashion.

This has turned out to be a great success. Whereas in 2003 there was a worldwide anti-war movement against the war on Iraq, including the largest rally ever taking place in Oslo, protests have hardly occurred against the wars in Libya, Syria and Yemen or the USA directed coup d’état in Ukraine.

Now humanitarian organizations like Amnesty International and Human Rights Watch or, as in Syria, White Helmets, are used as messengers of the narratives that serve the war and The Pentagon the best.

Since 2003 the social media have become an entirely new and tremendously powerful tool for spreading disinformation and emotions which drive the war. And because a critical press hardly exists, this has turned out very effective. The CIA, NSA and MI6 all have their own units performing psychological warfare in social media. Specific software has been developed for so called sentiment analysis as well as several techniques for creating and direct public opinion. There is software available to run false profiles on the Internet and this is used by the secret services.

In the article «I sosiale medier blir vi manipulert med følelser» (In social media we’re being emotionally manipulated) I wrote about this:

Financial Times reports that CIA has developed a taste for social media. The financial newspaper writes that CIA is going to expand the use of Amazon’s commercial software. According to CIA’s Chief Information Officer Doug Wolfe, the CIA is so satisfied with this; they’re already going to move parts of their operations to Amazon’s platforms. And The Pentagon is researching how to use Twitter in order to influence people’s mindsets.

The Guardian reports that The British army is creating a special force of Facebook warriors, skilled in psychological operations and the use of social media to engage in unconventional warfare in the information age. This force will use their competence in the use of social media attempting to control the narrative, according to the newspaper.

Israel Defense Forces (IDF) has been leading the way in this area of governmental/military use of social media, like they did during Operation Cast Lead in Gaza in 2008-2009. IDF is active on 30 platforms, including Twitter, Facebook, YouTube and Instagram, and in six different languages. Several countries have contacted IDF to learn from their methods.

In step with NATO’s increasing military arming and a growing number of countries being involved in conflicts and wars, the psychological warfare will escalate as well. Then it’s crucial to know how to recognize these tactics, and a place to start learning is to read what the psychological warriors themselves have to say on the topic, like in the manual for The United States (U.S.) Army Psychological Operations.