In spite of a formal democracy and public elections every second year, the Norwegian society is a hierarchical organization where people at the top reign and those at the bottom are powerless. What makes the situation even worse is the following combination: Through the EEA Agreement it is in fact EU’s political decisions that largely defines the framework for Norwegian self-governance – and thereby Norwegian politics. Simultaneously the domestic dominion of experts is steadily expanding. And at the end of the day, the ones really in control are the multinational corporations.

Socialism, from what we have experienced this far, has pretty much turned out to be one hierarchy replaced by another. Is it possible to do it better? Is it possible to create a model of society which combines freedom for people as well as empowering, for real, those who actually produce the wealth?

The pyramid of society

The traditional metaphor portraying society is the pyramid where the producers, the workers, sit at the base, the elite on the top, and in between you find all the various levels of the entire power structure. Old version at the left and the well-known organization chart at the right. 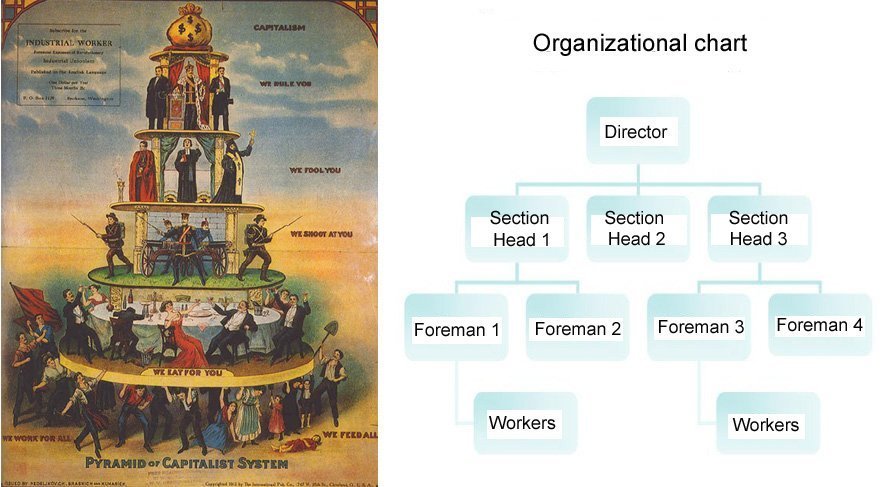 Essentially, the socialist model of society hasn’t differed that much from the model at the right. Two highly skilled political organizers like Vladimir Lenin and the Norwegian Martin Tranmæl basically shared the views on this matter. True enough, Lenin said that “the kitchen maids should take part in governing” and that “the Bolshevik state should be of a new kind”. But peel off the party speeches, it still turned out to be another pyramid with the central committee on top and the workers at the base.

This is often ascribed to the ill will of the communists. I see it as a consequence of society’s level of development. However, I’ll not get further into that discourse here. Both Tranmæl and Lenin de facto used the factory as a metaphor for society. Society should be organized efficiently and methodically like a factory. The difference from capitalism was that there should be no private capital – and no capitalists.

Is a different metaphor possible?

The utopian communists delighted in designing models for the ideal future society. I won’t challenge them. But I’ll launch a different way of thinking than the classical socialist concept. What makes it possible to think anew is the last revolution in terms of the productive forces.

The development of what we call the Internet might be the greatest revolution in the productive forces that has taken place this far. Essentially, all information can now flow freely between all members of society all over the world. The fact that there’s hindrance constructed and that the super powers and their intelligence organizations, as well as private corporations constantly try to convert the Net into an empowering tool of their own devise is another matter. This is obstruction of the new productive forces, not a consequence as such.

In 1984 I received a rather special request. It came from Ouagadougou in Burkina Faso, from President Thomas Sankara. It was addressed to AKP(m-l) (The Workers Communist Party (the Marxist-Leninists) ) by chairman Steigan, and the request was whether the party had any computer experts who could aid the poor country in their construction of a computer network.

Sankara’s vision to use a computer network in order to build democracy as well as spreading competence and knowledge was far ahead of its time. And the fact that this idea was developed in the poorest country in the world was a portent of what was later to follow when the Internet became available to billions of people throughout the world. Sankara realized that this would one day be possible, but when I received his request it was still early days. (We sent a couple of experts but they found out that the country lacked the technology to implement Sankara’s vision.) Today, however, it isn’t just possible, but absolutely necessary to revive this idea.

The Industrial Revolution laid the foundation for the machine-like perception of the world and the relationship between humans and nature. It made no difference that Marx, in his time, realized that human beings, as part of nature, could not raise above it. The mechanical perception triumphed, and is still the prevailing paradigm. But now science has proved it wrong. The complexity of ecological systems is better figured out pretty much by the day. Human beings have more or less ruled the earth for 10.000 years, but we may very well be outlived by the bristle worm. Capitalism is very much a society built on a consistent mechanical perception of nature. Nature is merely a – so far – untapped resource for maximizing the capital accumulation. In several articles I’ve pointed out that the capitalist model of growth has reached its extreme end and that this model is falling apart before our very eyes.

Ecological science has also provided insight into the interaction and joint action among every little part of nature, including human beings. Thus, we’re starting to perceive the contours of an alternative metaphor.

Biological systems as a metaphor

The Internet is a system that resembles the biological ones, because it’s a network growing organically, every part interconnected with the others; a system where you do not necessarily find an “up” or a “down”. Innovations can just as well appear from “below” or “outside” as from “above” or “inside”.

So, the Internet is a global network which can very well be compared to a biological system. Even though there are centers appearing stronger than others, it isn’t possible to perceive it as a pyramid of power. Concepts like center and periphery make little sense. Another characteristic of the Net is that a criterion for success is sharing.

Also, this biological metaphor for the modern society is not a product deriving from someone’s desk or an ingenious plan from a social reformist. The Net exists – in reality. It’s probably the world’s largest productive force, and thereby a useful model for a new way of viewing collective models of society. The Net exceeds the capitalist way of production, and it’s emblematic that the capitalists are facing huge challenges extracting profit from the Net. And to the extent that they succeed, they do it by limiting, dock and creating fences on the Net.

The Net is the common ground – the levy – of the modern era, and that isn’t just a metaphor, but a system which can be built collectively here and now. I received a comment on the article “Communism 5.0” that went something like this: “Ah, well, just keep going with that collective community project of yours”; meaning: this is some utopian, backwards stuff. But to bring along people’s intuitive grasp of collective community work and other forms of joint actions isn’t equal to going backwards. This perception is very modern indeed, when connected to the Internet in order to organize and integrate action.

The kitchen maids can start now

When Lenin describes the advanced phase of communism in his “State and Revolution”, it vanishes into the fog of the future. And maybe it had to be so, when the productive forces were not very advanced, when the illiteracy rate was so high and communication so poor. Old privileges and the very mindset of the privileged mattered as well. Anyhow. The kitchen maids had to wait.

This is no longer the case. The kitchen maids can start organizing – on the Net. They can dig into the secrets of the powerful, exchange experiences and knowledge with kitchen maids in every country and connect with anyone from bread deliverers to nutritional physiologists – or whoever they might wish. And from day one they are developing not only the Net and its content; they also learn how to govern a tiny slice of society. Competence and experience enhance as you work towards solutions.

When I plan a project, I prefer to use a program called “The Brain”. Basically it’s a visual database which makes it possible to construct very complex connections between topics, themes, resources, addresses, sources or whatever you like. I always have to use a starting point, but apart from that, there is no center or periphery or any up or down in the system. It’s three dimensional and can be studied from any point of view. This could be an image of a new organization model.

In a system like this, you gain nothing by keeping it to yourself, because then you receive nothing either. The most active synapses in the brain are the ones who gain most strength. This works the same way. The more you contribute, the more you receive. And this isn’t a fantasy; it is happening this very moment. People create exchange circles, interest groups, action groups, crowdfunding etc. They create expert groups and online newspapers. This has given rise to concepts like sharing economy. Things take place far from the authorities’ reach or beyond their effective control – which the powerful seem to find rather terrifying. Partly they try to stop it or construct hindrance; partly they try to control it.

The picture of the big fish and the small fishes organizing to fight back is a sweet metaphor for organizing. But the weak point of the image is this: The small fishes cannot create a real organism. However: a well-organized society on the Internet is as real as any factory. And hackers can break into The Pentagon.

Such a system doesn’t grow in a linear way or by arithmetic. It grows organically and geometrically. It provides a feasible answer to the problem of growth in modern society, where capitalism, with its inbuilt exploitation of all resources, being it pristine nature or people, has reached the abyss. A collective economy can fulfill what one might call growth without growth. That is: a growth in quality, absorption, dissemination and well-being, without necessarily increase the drain on stored resources.

The situation is critical. Scientists are pretty certain we’ve now entered the sixth epoch of extinction. Capitalism is chasing us like cattle towards the cliff. Instead of just complaining about it all, we need to start creating alternatives. NOW! I’ve called the alternative Communism 5.0.

The way I imagine Communism 5.0, it won’t appear in a clear and straight line. It’ll be a chaotic bush of initiatives, re-writings, new writings and experiments. No one can obtain a patent on Communism 5.0. It isn’t a theoretical construction in the heads of some more or less clever reformists of society. Communism 5.0 is as diverse as life itself. Thus; two of the major conservative ideologists’ objections to communism fall to the ground: Firstly, they like to portray communism as if it aims to establish the ideal society. This criticism doesn’t strike version 5.0. Secondly, they like to argue that communism claims to represent the entire truth and thereby is bound to be totalitarian. Communism 5.0 doesn’t aspire to create the perfect society and has fairly limited ambitions in matters of representing the entire truth. The goal is to abolish a system that allows 0,1 percent of the world’s population to control two thirds of the resources – and to give everyone the same rights and opportunities to enjoy the abundance our earth offers. This goal is huge enough by far, if one shouldn’t attempt to create a perfect society as well.

Communism 5.0 embraces all the interesting things human kind performs as soon as we get rid of the tyrannical straitjacket the globalized capitalism has forced us to wear.

In time private ownership of the resources and the means of production will appear as absurd as the idea of one human being claiming ownership of another.