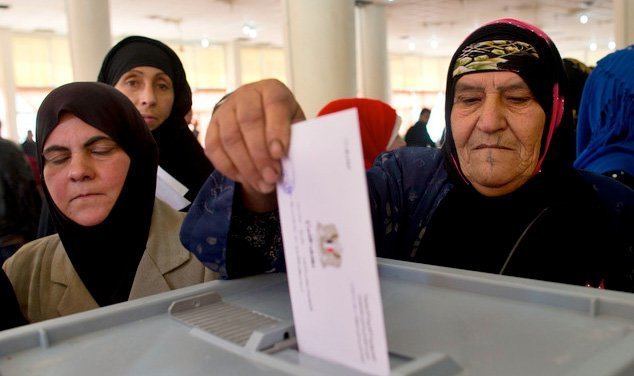 Today, the members of the Second International Tour of Peace to Syria were offered the privilege of accompanying the Patriarch of the Melkite Greek Catholic Church as he went to vote in the Syrian parliamentary elections. Gregorious III, the spiritual head of millions of Catholics all over the world, told us, in an audience before he invited us to join his procession, that the Syrian elections today were very important. In fact, he declared they represented “a challenge to the world” to recognize that, despite the covert machinations of certain western and Arab countries against Syria, Syrians are united in the pursuit of peace. He offered a prayer for Syrians, using the motto, “One people, one country!” Furthermore, he indicated that today’s elections, if successful, could be a model for other countries in the Arab world, similarly beset by foreign meddling.

The patriarchal procession left the 19th century Greek Melkite Catholic Church and wound its way through the narrow, cobblestone streets of Old Damascus to the Armenian Catholic Church, where it was met by priests of that church. Together in the chapel, after exchanging some ecumenical greetings, the whole procession then departed to the school next door where the polling station was located.

There was quite a crowd who came to vote and witness the voting, which was conducted in secret behind a white curtain. The patriarch posed a long time, poised with his ballot in hand, over the ballot box for many flash photographs. There was applause and a murmur of satisfaction when he finally dropped his ballot into the box.

Gregorious III was not the only person in a defiant mood about today’s parliamentary elections. The Syrian government itself calls the elections “an exercise in national sovereignty.” It called for these elections the same day that the agreement was signed between the US and Russia some weeks ago for a partial cessation of hostilities in Syria. At first, all the great powers opposed the Syrian government’s initiative for parliamentary elections, because there was no mention in the Geneva l document of 2012 that elections could be held in Syria before the talks to establish a transitional government were completed. Just today, the US State department dismissed the Syrian parliamentary elections as “not representing the will of the Syrian people”, even before the results were in (though where the US government derives its authority to pronounce of the validity of elections in other countries escapes me.)

At first, even the Russian government was not fully onside with the calling of parliamentary elections in Syria. However, just yesterday, in a meeting with Argentinian diplomats, Sergei Lavrov indicated that he did not want to see a “void” in government in Syria. So the Syrian government moved pre-emptively to fill that void, by holding elections, just as it fills the void by continuing the regular functions of government such as cleaning the streets and paying the salaries of civil servants.

So what does a Syrian parliamentary election look like? When we left the hotel this morning, there were small groups of young people in the streets wearing similarly-coloured clothing and handing out quarter-page flyers. These groups of uniformly handsome young men and attractive young women (no accident, I assume) were representing the various lists contesting the elections. They pressed the leaflets into the hands of anyone and everyone who would take them, even us foreigners. The flyers contained the names of all the candidates for election in Damascus from each slate. Sometimes, the flyers were only on behalf of a single candidate. It reminded me of trade union elections at national union conventions back in Canada.

On the walls of the buildings along the narrow streets were plastered hundreds upon hundreds of election posters. Over the streets were strung banners showing small and large groupings of well-dressed candidates representing each slate. Clearly, the 250 parliamentary seats were being hotly contested.

On every corner were uniformed soldiers armed with assault rifles. Now, if we had an election in Canada under the watchful eyes of the military like this, we would feel that we were close to fascism. Not so here. After five long years of war, the Syrian people welcome the presence of their army. After all, just several kilometres away, in neighbouring Ghouta, all kinds of terrorist mercenaries hold the population hostage and in terror. Until just three months ago, these foreign-backed terrorists had been lobbing mortar shells on Damascus virtually every single day for five years. They timed their attacks to coincide with rush hour in the mornings to achieve the maximum kill of working people and at 12:30 pm every day just as school children were coming out of school. Many were killed and wounded. However, after their leader, Zahran Alloush, was killed in a Syrian Army drone strike, the mortars fell silent.

So, the Syrian Arab Army soldiers were manning checkpoints and guarding public buildings precisely to give Damascenes the confidence that they could come out on the street without facing suicide bombers and car bombs. It worked! Not a single terrorist incident took place in Damascus today. And our guide informed us that tomorrow armed soldiers would be few and far between on the streets of Damascus.

Our tour guide led us past dozens of polling stations over the course of our tour of the historic sites of Old Damascus that day. In the Old City, the polling stations were never more than two blocks apart, which is far more frequent than in Canada.

We actually went inside five different polling stations, which were staffed mostly by women. And here’s how those little quarter-page flyers work their magic:

When a voter (of eighteen years or older) enters the polling station, he or she must produce the government-issued ID card. His or her name is then dutifully entered into a register and the voter is given a ballot and an envelope. The ballot has spaces to enter the 29 names of candidates who are contesting the seats open for election in Damascus. The voter may go behind the white cloth screen and fill in as many as 29 names or as few as one. Or, he or she may take one of those little flyers containing the candidates’ names of one particular slate, put it into the envelope, and then proceed to drop the envelope, containing the blank ballot and slate list, into the ballot box. Or, the voter can strike out any names on the flyer containing the slate’s list that he or she doesn’t like and put the envelope, with the blank ballot and the amended slate list, into the ballot box.

After casting the ballot, the polling clerk dips the index finger of the voter onto a pad of indelible ink so that he or she can’t vote more than once.

Having worked on many Canadian elections, I can attest to the fact that Syrian elections are different from Canadian elections. But that doesn’t mean they don’t represent the national will, as claimed by US State Department. After all, with the Canadian first-past-the-post system, the representation of political parties in the House of Commons in Ottawa bears little resemblance to their share of the popular vote. And, in Canada, we have, in effect, a two party system. Only the big business-friendly Liberals and Conservatives have ever held power in our country in 150 years.

In Syria, the system works this way: out of 250 seats in the Syrian parliament, 170 are allocated to the ruling Ba’ath Party and its allies in the National Progressive Front. The reminder are open for grabs to anyone who holds only Syrian citizenship, is over 18, and has no security issues (is not actively fighting with one of the terrorist groups). In this election, there were an incredible number of 3000 candidates for all 250 positions. Why? Because there is a good salary and lots of perks for MP’s in Syria (just as there are in Canada). There were so many candidates, in fact, that 7000 candidates became discouraged and dropped out of the running before today’s election.

It will take up to a week to count all the ballots.

Meanwhile, Syrians were not shy to share their enthusiasm for these elections. I interviewed a number of them, men and women, in my statistically-insignificant exit polling. One middle-aged man told me, “These elections show the world that Syrians – nobody else – will determine the future of Syria!” Another young first-time voter indicated that she felt it “her national duty” to participate in the elections. A young man declared his belief that these elections would speed up the peace process. A young woman said she felt the elections would bring a better life to Syrians. I asked if she meant that “better life” would include Syrian women. She replied it would include “all Syrians.” Still another young first-time voter, when asked by me what the world would think of these elections, said, “It doesn’t matter what they think. It is up to Syrians to decide for themselves.”

I agree with the voters and the patriarch. The Syrian government acted boldly and wisely. It scheduled parliamentary elections under the constitution of 2012 so that it could come to the table in Geneva in two days (April 15, 2016) armed with a fresh mandate from the Syrian people to negotiate on its behalf. The representatives at Geneva of the armed opposition have never submitted themselves to the test of an election in any of the territories of Syria they have invaded and occupied. Their only mandate derives from the arms, technical help, and money that flows to them from the USA, Israel, UK, France, and the Gulf despots through Turkey and Jordan. In fact, the Syrians unlucky enough to have lived in the “rebel-held” areas voted with their feet about their terrorist overlords. The vast majority of them fled, either to other countries, or to government-held areas. Damascus and Latakia, for example, have doubled and tripled their populations due to internally-displaced persons.

While we wait for the results of today’s elections, members of the Second International Tour of Peace have been granted an audience with the Syrian Minister for Reconciliation. I will share the insights we glean from him about the process of arranging truces, evacuating foreign fighters, offering amnesties, reabsorbing former opposition fighters into Syrian society, and bringing home refugees in a report shortly.