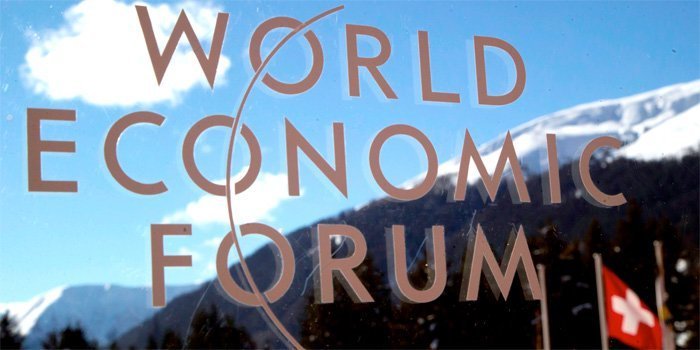 World Economic Forum (WEF), holding their annual meeting in Switzerland, is rightly called the “Billionaire Club”. Be aware that this is not some kind of joke or harassment. If one meeting could just as well be named “World Congress of Corporate Money”, it’s the one taking place in the alpine resort Davos-Klosters every year. Thus, there’s every reason to attach importance to what the billionaires (and their trained politicians) are actually doing at these meetings, and what guidelines and politics they present. Because these are likely going to be reflected in boardrooms and parliaments worldwide. The world’s 0.01% wealthiest people are discussing how to become even wealthier, and it would be foolish not to study how they intend to do so.

World Economic Forum is a private foundation funded by its 1,000 member companies, typically global enterprises with more than five billion dollars in turnover.

This is financial and industrial capital in the premiere league. Moving further down the list reveals more of the same. What we find, is that it’s the absolute kingpins of western capitalism and oil dictatorships capital that’s represented.

Just prior to the 2017 meeting, Oxfam has published a report showing that Eight men now own the same amount of wealth as the poorest half of the world.

Dominating the meeting is the United States. The list of US participants made up 20 of a total of 80 pages. But monopoly capital aka corporate money from the rest of the world were there as well: Russia, South Korea, Japan, Saudi Arabia, UAE, Qatar, Turkey, France, United Kingdom. This is the United Nations of Corporate Money.

However after the backlash for globalism in 2016 it is China’s Xi Jinping who is the star  on the 2017 meeting.

(If someone, or myself, had time for it, it would’ve been quite fun to analyze the participant list in greater detail. The findings would be entertaining, but the result would be the same: This is Corporate Money’s World Congress.)

What does this mean?

Some people, when billionaire meetings of the WEF kind are mentioned, they just stare with empty eyes, and then, faster than you can pronounce 6 480 billion dollars! (which is the total wealth of the world’s dollar billionaires, or about 10% of world GDP), they’ve said conspiracy theorist!

People like that are either lazy or foolish. This is about monopoly capital’s self-organization as a class. People who price their lectures at several $ 100 000 per hour do not attend this kind of meetings for the free champagne and canapes. They are there because it pays for them, because it increases their power, and because it provides a lot of the contacts and information they need to become even richer. By studying the World Economic Forum and the political guidelines that are drawn there, we get a unique insight into the globalized capital’s political and economic lines, and who the people in The 0,00004% Community really are.

The political lines presented in Davos will reappear in the UN, the EU and in Norwegian government propositions. They will be further processed by policy institutes, and appear in chronicles, campaigns and editorials. Some of the world’s most important research institutes and universities were (/ are) there, which means it will also be embedded in research programs and education.

Important items on the agenda

The internet has a dark side. We need a plan for taming it

The devastating impact of anti-globalization.

Integrating refugees: the role of business

This may seem overwhelming, and rightly so, but be also aware that however powerful the billionaires and their henchmen, they are not clairvoyant, and they do not have absolute control. Many of the reports are based on hard facts and real research. But there is also pure wishful thinking and ideology. E.g. they haven’t understood, and cannot understand, how severe the crisis of modern capitalism is or what the causes are. And for someone this powerful, they make surprisingly few attempts to understand their enemies. This of course due to the fact that they, with some justification, consider us senseless cattle that must be herded by those who know best.

Davos Wonders If It’s Part of the Problem

Did the global elite’s devotion to borderless capitalism sow the seeds of a populist backlash?

As transnational capitalism holds its annual meeting 17th – 20th January 2017, some attendees have already started to wonder if they are actually part of the problem. This is what Matthew Campbell and Simon Kennedy is writing on the Bloombergwebsite.

Kenneth Rogoff, a Davos regular and former chief economist of the IMF, says:

“A joke I’ve told 1 000 people in the months since leaving Davos is that the conventional wisdom of Davos is always wrong: No matter how improbable, the event most likely to happen is the opposite of whatever the Davos consensus is.”

“In its four decades of existence, the WEF has nurtured a broad consensus in favor of globalization and open markets. At its core is the notion that capital, goods, and people should be able to move freely across borders, a principle that can deliver huge benefits to those with education and money but seems terrifying to those without either. For the 3,000 people who will convene in the small Swiss town from Jan. 17 to 20, the 2017 event could be a moment of reckoning. At speakers’ podiums, coffee bars, and the ubiquitous late-night parties, they’ll be asking themselves whether Davos has become, at best, the world’s most expensive intellectual feedback loop—and, at worst, part of the problem. “Since the recession, the boom has benefited the upper-income earners and done little for those in the middle or on less. That’s the backlash,” says Nariman Behravesh, the chief economist for research provider IHS Markit. “The Davos vision of the world has not delivered a broad-based economic recovery.”

The billionaires will gather in coffee shops and lounges in Davos and have worried conversations about the globalist project and how to rescue it. IMF boss Christine Lagarde, who was recently convicted of serious economic crimes in the magnitude ofseveral hundred million dollars – no sentence passed, proposes to “move toward a globalization that has a different face, and which is not excluding people along the way.» BlackRock Vice Chairman Philipp Hildebrand said in an interview that it’s important “there be some repositioning to show Davos can make a contribution to dealing with the fundamental issue of inequality of opportunity.”

The Davos elite will devise new plans attempting to continue their globalist project, but it’s very interesting that in 2017, they must admit that the people do not like them.

And it’s interesting that the participant who gets the most attention is the Davos newcomer Xi Jinping, who will launch China’s own vision for international cooperation.

I’m a big supporter of what Chinese military philosopher Sun Tzu says in The Art of War about knowing both the enemy and yourself:

Unfortunately, Norwegian and international leftists suffer from the error last mentioned, something which has had catastrophic consequences. But it’s possible to do something about it. E.g. if we start with knowing the enemy, then studying the World Economic Forum, its ringleaders and their policies is not a bad place to start. Also, it’s a lot more fun than self-flagellation.