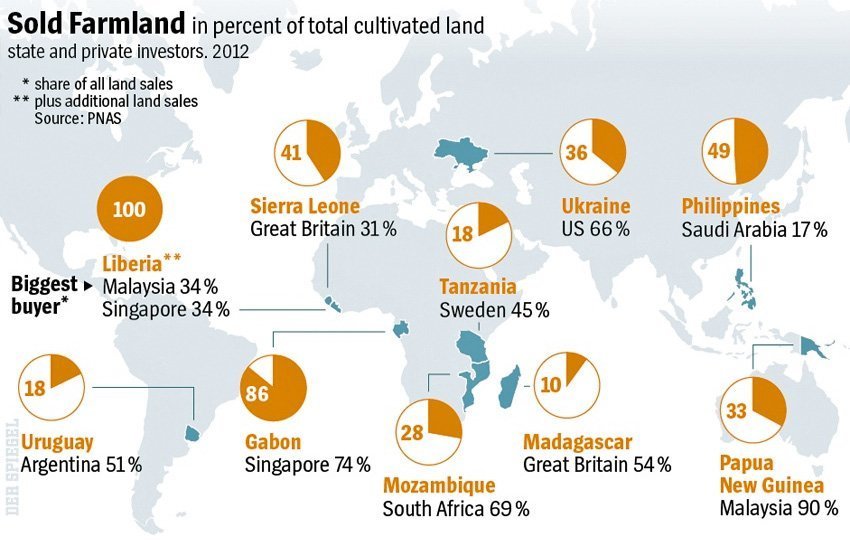 Wars in recent times have mostly been fights over energy, particularly oil and gas. Future wars will include food and water as well. The climate crisis enhances this tendency, and no one can provide a good answer to the question: how to feed nine billion people when there is less oil, less topsoil and less available freshwater. 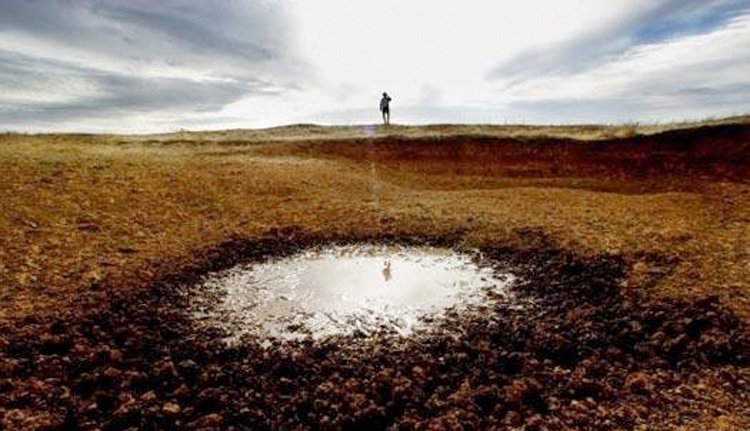 The planet loses 25-40 billion tons of topsoil every year. That equals a five to eight centimetre layer covering all of Norway. This was revealed in a fairly recent report from Food and Agriculture Organisation (FAO) of the UN: “Status of the World’s Soil Resources”. In addition, large areas of the soil are in poor condition, or very poor condition. One third of the topsoil is moderately to badly deteriorated, Jenny Dahl Bakken wrote in the Norwegian newspaper “Nationen” in December 2015. In the preface, the report states:  “Further loss of productive soils would severely damage food production and food security, amplify food-price volatility, and potentially plunge millions of people into hunger and poverty.”

In 1950, 2.55 billion people lived on this planet. Prognoses show that in 2020 there will be 7.7 billion human beings in the world. That is three times as many mouths to feed, and only in a time span of 70 years, just a little more than a couple of generations. Nothing similar has ever happened in the history of human kind. Obviously, this has put a lot pressure on the resources and the food production. According to the prognoses, the available productive soil per capita will be 61 percent lower in 2025 than it was in 1960. 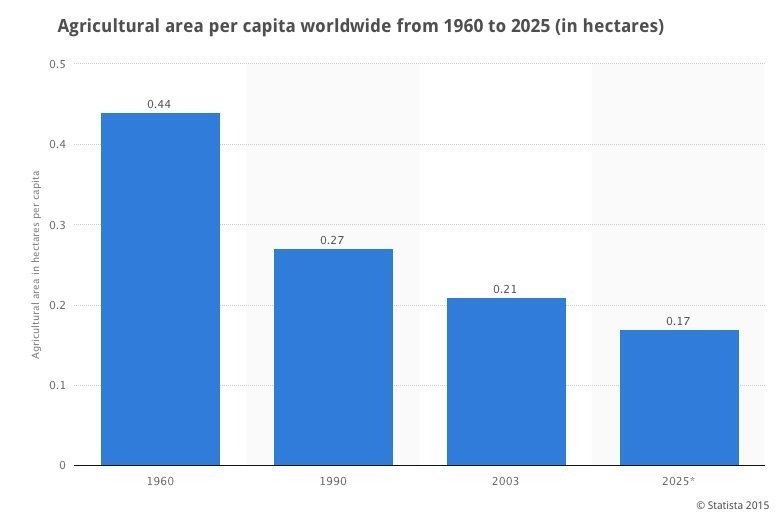 More intensified farming, more agriculture machinery and chemical fertilisers have partly compensated for the loss of topsoil and the reduction in productive soil per capita. But this gain comes at a price, which is soil exhaustion, increased erosion, more chemical pollution and increased salinization of the topsoil, as described in the FAO document.

This has led to a situation where an increasing number of countries are involved in land grabbing, which means they buy land in other countries (often involving bribing and extortion) in order to grow food for their own citizens. This happens in particular in Africa and Latin America, but the fertile mould of Ukraine is also a desirable target for land grabbing.

This new variety of colonialism is above all taking place on the African continent. In 2012, Devon Peña from University of Washington, Seattle, presented this map of land grabbing in Africa. 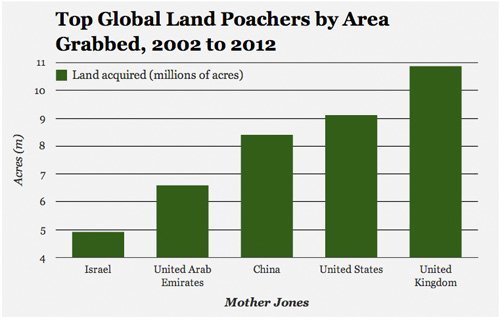 China, USA, Israel, South-Korea and Saudi-Arabia are among the most active land grabbers, but they are accompanied by several others. Money rule. Countries with a capital surplus secure land for themselves in poor countries, so it’s an uneven match. Liberia is supposed to have sold all its arable land to foreign countries. Gabon; 86 percent and The Philippines; 49 percent. (Der Spiegel)

In fact, more than 60 percent of crops grown on land bought by foreign investors in developing countries are intended for export, instead of for feeding local communities. Worse still, two-thirds of these agricultural land deals are in countries with serious hunger problems.

To rub it in: rich countries buy the food out of poor peoples’ mouths, not just at the moment, but in the indefinable future.

The global warming, over-exploitation of the subsoil water, intensified irrigation etc., have all endangered the water resources. The shortage of water is acute in many areas. The water-war has already started.

The map shows water shortage in large parts of Asia, where 60 percent of the human beings on the earth live. At the same time, a massive privatisation of the water is taking place.

Nestlé empties the aquifers in developing countries, destroys the countries’ natural resources and makes people dependent on water from bottles. This is neoliberalism in a nutshell – or should we say in a plastic bottle?

The water giant of the world is Nestlé, which owns 70 percent of the world’s bottled water brands, including Perrier, San Pellegrino and Vittel. And the war of the water has just started. Numerous countries are drained of subsoil water, among other things due to a globalised agriculture which is not sustainable. To top it all, the freshwater giants come rushing in to exploit the poor and vulnerable.

The first advanced civilizations in the world were created around the great rivers; Indus, the Nile, the Euphrates, Tigris, Hoang Ho. The rivers offered an abundance of water to feed a large number of people. Today, half of the world’s population live in cities, and they do not have sufficient clean freshwater. Also, the water which is necessary to produce the food they need is rapidly disappearing. Welcome to the 21th century – the era of the water-wars.

China’s Hoang Ho, The Yellow River, which provided a lot of the fundament for the Chinese culture, is now being drained along the way and actually no longer reaches the sea on a regular basis. This has occurred every year for the last 35 years. The same thing is happening to the mighty Colorado River which was once powerful enough to sculpt the Grand Canyon! The once so lush and rich in species Colorado Delta now resembles more of a desert area than a fertile river delta. The water is being used by the cities and the farming activities along the river – and emptying it. And, because the river cannot supply sufficient amounts of water to satisfy the needs of agriculture, the subsoil water is drawn from undergrown much faster than it’s naturally refilled. And now the farming industry is getting competition from the shale gas industry, which use between three and twelve barrels of water for every barrel of oil they extract. The once so proud Rio Grande, creating the border between USA and Mexico – no rio, no grande! – it now ends by El Paso, 1200 kilometres from the old river mouth, simply because there’s no more water left. The Nile, which is the main artery for 84 million Egyptians, used to carry 32 billion cubic metres of water into the river mouth. Now the amount of water is down to merely two billion cubic metres – six percent of what it used to be! In addition, all over the world, the glaciers, which have fed the rivers melting water from time immemorial, are shrinking.

No phosphate – no food

Phosphate minerals have provided food for the world’s growing population. However, in the not-so-distant future, we will live in a world with no more phosphate left, according to the Norwegian news outlet “ABC Nyheter”.

The problem is that our current phosphate consumption is so high. The remaining deposits will be emptied at some point between 2035 and 2075.

“Phosphate is a fundamental element of life. No phosphate, no life. And reversed: if we discharge too much phosphate into the water, we kill the organisms living there,” professor Petter D. Jenssen at NMBU (Norwegian University of Life Sciences) said. 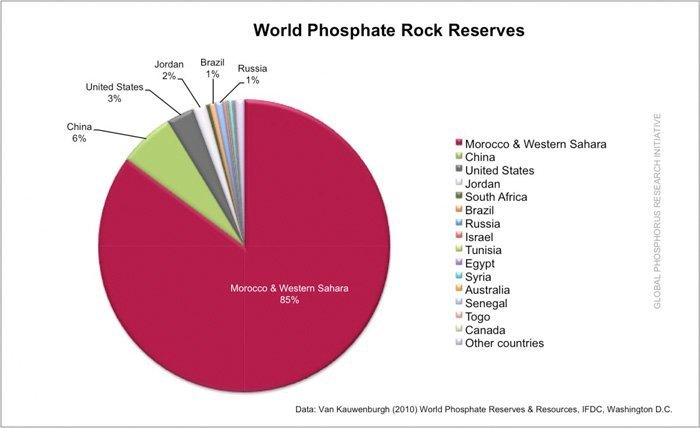 As shown in this figure, most of the world’s phosphate minerals are found in Morocco, or rather, in the occupied West Sahara. In order to control the occupied area, Morocco has built the longest wall in the world (actually, most of it is a sand rampart); it stretches for 2700 kilometres and is militarised all the way.

Such an uneven natural distribution of a critical factor in all food production obviously increases the risk of war over these resources in the future.

USA’s military experts believe the control of energy, soil and water will determine who rules the world. The investigating journalist Nafeez Ahmed describes this in “Middle East Eye”. The reports can partly be read as a confirmation that Pentagon takes the climate crisis seriously and partly as a dystopian prediction of a coming century where wars will be fought over less and less available resources.

The report “Energy Security and Sustainable Strategy” was published in June 2015 and it emphasises that “the effect of climate changes, rapid technology proliferation, and shifts in centres of economic activity represent major forces of change.”

Another report published in February 2015 titled “New Realities; Energy Security in the 2010s and Implications for the US Military” clearly shows that Pentagon prepares for wars on energy, water and food supplies. The report concludes explicitly that USA’s interests could lead to military interventions in the Middle East and Africa.

This is the third article in a mini-series. De former two were:

The War in Syria and Fear of the Empty Space

The desperate fight for the last oil (and gas)