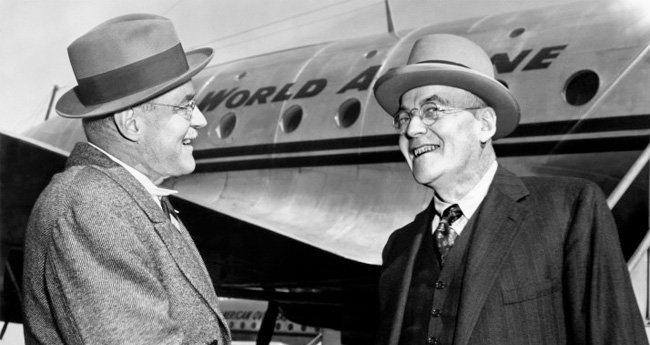 The CIA began its active meddling in Syria in 1949 — barely a year after the agency’s creation. Syrian patriots had declared war on the Nazis, expelled their Vichy French colonial rulers and crafted a fragile secularist democracy based on the American model. But in March 1949, Syria’s democratically elected president, Shukri-al-Quwatli, hesitated to approve the Trans-Arabian Pipeline, an American project intended to connect the oil fields of Saudi Arabia to the ports of Lebanon via Syria. … the CIA engineered a coup replacing al-Quwatli with the CIA’s handpicked dictator, a convicted swindler named Husni al-Za’im.

While the compliant American press parrots the narrative that our military support for the Syrian insurgency is purely humanitarian, many Arabs see the present crisis as just another proxy war over pipelines and geopolitics.

In their view, (araberne, min kommentar) our war against Bashar Assad did not begin with the peaceful civil protests of the Arab Spring in 2011. Instead it began in 2000, when Qatar proposed to construct a $10 billion, 1,500 kilometer pipeline through Saudi Arabia, Jordan, Syria and Turkey. Qatar shares with Iran the South Pars/North Dome gas field, the world’s richest natural gas repository. The international trade embargo until recently prohibited Iran from selling gas abroad. Meanwhile, Qatar’s gas can reach European markets only if it is liquefied and shipped by sea, a route that restricts volume and dramatically raises costs. The proposed pipeline would have linked Qatar directly to European energy markets via distribution terminals in Turkey, which would pocket rich transit fees. The Qatar/Turkey pipeline would give the Sunni kingdoms of the Persian Gulf decisive domination of world natural gas markets and strengthen Qatar, America’s closest ally in the Arab world. Qatar hosts two massive American military bases and the U.S. Central Command’s Mideast headquarters.

Secret cables and reports by the U.S., Saudi and Israeli intelligence agencies indicate that the moment Assad rejected the Qatari pipeline, military and intelligence planners quickly arrived at the consensus that fomenting a Sunni uprising in Syria to overthrow the uncooperative Bashar Assad was a feasible path to achieving the shared objective of completing the Qatar/Turkey gas link. In 2009, according to WikiLeaks, soon after Bashar Assad rejected the Qatar pipeline, the CIA began funding opposition groups in Syria. It is important to note that this was well before the Arab Spring-engendered uprising against Assad.

A damning 2008 Pentagon-funded Rand report proposed a precise blueprint for what was about to happen. That report observes that control of the Persian Gulf oil and gas deposits will remain, for the U.S., “a strategic priority” that “will interact strongly with that of prosecuting the long war.” Rand recommended using “covert action, information operations, unconventional warfare” to enforce a “divide and rule” strategy. “The United States and its local allies could use the nationalist jihadists to launch a proxy campaign”

Despite the prevailing media portrait of a moderate Arab uprising against the tyrant Assad, U.S. intelligence planners knew from the outset that their pipeline proxies were radical jihadists who would probably carve themselves a brand new Islamic caliphate from the Sunni regions of Syria and Iraq. Two years before ISIL throat cutters stepped on the world stage, a seven-page August 12, 2012, study by the U.S. Defense Intelligence Agency, obtained by the right-wing group Judicial Watch, warned that thanks to the ongoing support by U.S./Sunni Coalition for radical Sunni Jihadists, “the Salafist, the Muslim Brotherhood and AQI (now ISIS), are the major forces driving the insurgency in Syria.”

Let’s face it; what we call the “war on terror” is really just another oil war. We’ve squandered $6 trillion on three wars abroad and on constructing a national security warfare state at home since oilman Dick Cheney declared the “Long War” in 2001. The only winners have been the military contractors and oil companies that have pocketed historic profits, the intelligence agencies that have grown exponentially in power and influence to the detriment of our freedoms and the jihadists who invariably used our interventions as their most effective recruiting tool.