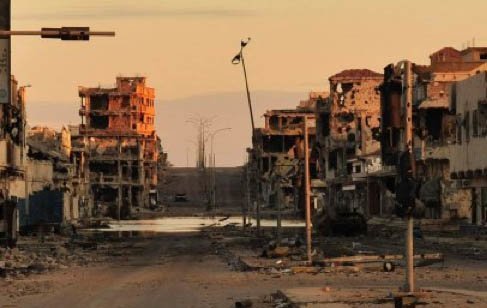 The “humanitarian war” against Libya drew on a model close to western liberal hearts, especially in the media. In 1999, Bill Clinton and Tony Blair sent NATO to bomb Serbia, because, they lied, the Serbs were committing “genocide” against ethnic Albanians in the secessionist province of Kosovo.

David Scheffer, U.S. ambassador-at-large for war crimes [sic], claimed that as many as “225,000 ethnic Albanian men aged between 14 and 59″ might have been murdered. Both Clinton and Blair evoked the Holocaust and “the spirit of the Second World War.”

The West’s heroic allies were the Kosovo Liberation Army (KLA), whose criminal record was set aside. The British Foreign Secretary, Robin Cook, told them to call him any time on his mobile phone.

With the NATO bombing over, and much of Serbia’s infrastructure in ruins, along with schools, hospitals, monasteries and the national TV station, international forensic teams descended upon Kosovo to exhume evidence of the “holocaust.” The FBI failed to find a single mass grave and went home. The Spanish forensic team did the same, its leader angrily denouncing “a semantic pirouette by the war propaganda machines.”

A year later, a United Nations tribunal on Yugoslavia announced the final count of the dead in Kosovo: 2,788. This included combatants on both sides and Serbs and Roma murdered by the KLA. There was no genocide. The “holocaust” was a lie. The NATO attack had been fraudulent.

Behind the lie, there was serious purpose. Yugoslavia was a uniquely independent, multi-ethnic federation that had stood as a political and economic bridge in the Cold War. Most of its utilities and major manufacturing was publicly owned. This was not acceptable to the expanding European Community, especially newly united Germany, which had begun a drive east to capture its “natural market” in the Yugoslav provinces of Croatia and Slovenia.

By the time the Europeans met at Maastricht in 1991 to lay their plans for the disastrous eurozone, a secret deal had been struck; Germany would recognize Croatia. Yugoslavia was doomed.

In Washington, the U.S. saw that the struggling Yugoslav economy was denied World Bank loans. NATO, then an almost defunct Cold War relic, was reinvented as imperial enforcer. At a 1999 Kosovo “peace” conference in Rambouillet, in France, the Serbs were subjected to the enforcer’s duplicitous tactics.

The Rambouillet accord included a secret Annex B, which the U.S. delegation inserted on the last day. This demanded the military occupation of the whole of Yugoslavia — a country with bitter memories of the Nazi occupation — and the implementation of a “free-market economy” and the privatization of all government assets. No sovereign state could sign this. Punishment followed swiftly; NATO bombs fell on a defenseless country. It was the precursor to the catastrophes in Afghanistan and Iraq, Syria and Libya, and Ukraine.