Brandon Bryant worked for five years as a drone pilot. From a container in New Mexico he guided drones on the other side of the Earth. Together with another pilot, he sat in something that resembles a cockpit of an airplane. The pilots used joysticks and buttons to manoevre the drones and to kill their victims.

In front of them, they had a number of TV screens, like in any other arcade shooting game. Only that their targets were real human beeings. The screens showed what the Predator drones did at their command in Afghanistan. Within five years Brandon Bryant had seen men, women and children die on the screen, because he had pressed a button. One day he could make it no more.

The murder of a child

Along with his co-pilot Bryant were sitting in front of the screens. They saw a dry landscape and a house with a flat roof. They were ordered to shoot and the colleague pressed a button that launched a Hellfire missile 10,000 kilometers away. They saw no people, but suddenly a child came around a corner. Seconds later the building exploded in a far-away village near Mazar-e-Sharif. When the dust drifted away there was no child anymore. – Never mind, it was a dog, their commanding officer said dryly. The two soldiers re-played the video of the shooting. It was a child.

After that Brandon Bryant was unable to continue as drone-pilot. The German magazine Der Spiegel brought Bryant’s story.

This form of long distance assassinations is Obama’s war. During his first four years as president, he gave orders to more than 300 drone attacks in Pakistan – more than six times as many as his predecessor George W. Bush.

The Drone War is controlled from seven bases in the United States under the auspices of the so-called U.S. Air Force’s Remotely Piloted Aircraft (RPA) Task Force. The military claims that they «save lives» by handing the war to remote-controlled robots. The families affected in Somalia, Djibouti and Pakistan see it quite differently.

The London-based Bureau of Investigative Journalism (TBIJ) says that between June 2004 to mid September 2012, the drone attacks killed between 2,562 and 3,325 people in Pakistan. Of those, between 474 and 881 have been civilians, including 176 children.

In addition, the drone war has made tens of thousands of people live in constant fear. USA is not at war with Pakistan, on the contrary, they are so-called allies. Nevertheless The U.S. Is wageing a non-declared war against the people of Pakistan. This raises serious questions of international law. The drone war is probably a war crime. According to a study three out of four people in rural Pakistanis regarde United States as their enemy.

The preliminary climax of Obama’s murder campaign came in 2010. Since then, the number of attacks have declined, but the production of drones beat every record, and the U.S. military has changed its strategy. Previously drones would target specific such as Al-Qaeda leaders; now they are implementing the so-called signature attacks. This means that the drones are fed with a set of criteria for what may be a hostile target. When they find one, all the pilot needs to do in his container in Mexico is to pull the joystick and press the button in order to send a Hellfire missile towards the target. This has led to far more common foot soldiers being killed.

Brandon Bryant followed the daily lives of their victims to be. He saw fathers play with their children; perhaps only a few days before he killed them. «They were good fathers,» says Bryant.

No tears for Pakistani children

After the horrific shooting tragedy in Sandy Hook Barack Obama appeared on television drying an eye with his finger. But no one has seen him shed a tear for all the Pakistani children he has assassinated. And neither for the Palestinian children killed by Israel in Gaza.

Obama is well mannered and eloquent where George W. Bush was boorish and vulgar. But it’s Peace Prize winner Barack Obama that has made robotic assassination a military doctrine. 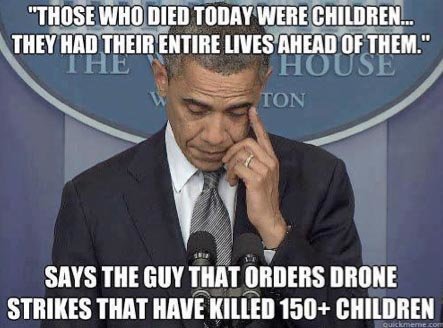 PS: Ritual Dance of the Child Killer is of course a quote from the Frank Zappa album Freak Out! (1966).