In her recent article in the Norwegian newspaper “Morgenbladet”, the head of “For velferdsstaten” (a broad alliance for the welfare state in Norway), Linn Herning, raised an important issue concerning today’s labour movement. She describes her frightening experience of recognising her own demands being claimed by marching fascists. “Right wingers claim my point of view.”

Herning brings up a main question for the labour movement and the left in this article: How do we respond to the right wing, be it right wing populists or downright fascists, coming out as advocates of viewpoints abandoned by parts of the political left?

The betrayal against the working class

The collapse of the Soviet Union paved the way for international monopoly capitalism’s massive offensive against the working class all over the world. During the past 25 years, the capital’s share of social economic growth has reached a level equal to the start of the 20th century – and the class distinction between the wealthiest and the ordinary worker is as deep as it was back then.

This wouldn’t have been possible, had the political left and the labour movement not abandoned class struggle and turned their back on the working class.

The socialistic left surrendered to the hegemony of social democracy in one country after another. They followed the parole of Maggie Thatcher: There Is No Alternative – TINA. And the social democracy turned into social liberalism.

And we’ve been handed the four freedoms of the EU and the EEA – all intended for the class interests of capital as well as reducing the working class’ wages, rights and benefits.

The core of globalised capitalism is free flow of capital all over the world, in order to secure low labour costs. The social democracy and its offshoots have accepted this, as well as free flow of labour, which allows the capital to replace workers at home with immigrants who accept lower wages.

In Norway, governments from either side of the political scale, both left and right, have privatized former public services. But nothing beats the extensive privatization of public health services and social services, which took place during the leadership of Jens Stoltenberg and his two so-called red-green governments.

During that same process, the socialist parties shifted their focus from class struggle to identity politics. The main issues of feminism changed from those concerning the working class to those concerning the bourgeois. The feminism demonstrated during the 2016 U.S. elections was not that of the present day’s Match Workers. It was the feminism of the monopoly bourgeois, the war criminals and the billionaires. And the left exposed its own ideological collapse by not spotting the difference.

As Simon Winlow, Steve Hall and James Treadwell write in the book “The Rise of the Right”:

“The left lost interest in the traditional field of political economy, and instead opened up new theatres of conflicts on the field of culture. Generally speaking, the left accepted the capitalist horizon.”

They quote H. Wilford’s book “The CIA, the British Left and the Cold War: Calling the Tune?”, where he writes:

“Central to this was the abandonment of class and the turn to language, cultural identity and social movements… The American liberal-progressivist habit of demonizing socialism by placing it in the same breath as fascism was imported into Europe to provide more attractive and subtle support to the conservative right’s demonization program.”

The leaders of this neo liberal left policy are amply rewarded by their principals and have reasons to expect safe positions including million-high wages and expense accounts. The losers in this game are above all the people of the working class. This graph from the USA shows the downtrend in labour’s share in GDP, from 51 percent in 1970 to just above 42 percent in 2015. 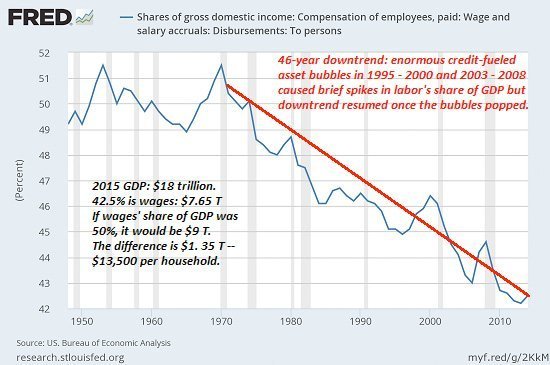 Working class people turn their back on the left

A widespread contempt towards the working class can be found in the bourgeois left. This is amplified by the current trend of identity and cultural attitudes determining one’s credibility. Working class people often hold on to traditional values on cultural issues. The left, in its bourgeois ways, regards the workers as conservative, or even reactionary. The monopoly bourgeois, on the other hand, appears to be “cultural progressive” and therefore more attractive to a leftist politician who aspires to learn the lurks and perks of the world of success.

Class contempt stinks. Workers recognise that smell immediately, and respond accordingly. As the bourgeois way of thinking achieved hegemony in the leftist parties, they parted with the working class. They accepted the premises of capital and embraced the alleged individual opportunities it offered. (The fact that this individualism boils down to becoming obedient followers under the dominion of Facebook, Google and Apple, is a different story.)

This paves the way for right-wing extremists or even fascists. They can easily take over some of the issues abandoned by the left, adjusting them to their own ideological agenda.

In one country after the other varieties of right-wing parties take over the working class voters. It has happened in Great Britain, by the UKIP. It is very much taking place in France, as Front National  (FN) sweeps the board in old industrial areas, formerly home ground of socialists and communists. And, of course, it’s happening in Sweden; the stronghold of identity politics.

Sociology professor Jens Rydgren at Stockholm University is the editor of the book “Class Politics and the Radical Right”. According to Rydgren, “right-wing extremism has been proletarised” during the last decades.

“It concerns groups of voters who have become more vulnerable during the last decades, their jobs are disappearing or being exposed to competition on a global level. Also, their position in society is generally more exposed.”

In the same book Rydgren’s colleague, Simon Bornschier, has written an article titled “The populist right, the working class, and the changing faces of class politics”. He says it is now scientifically supported that the working class is overrepresented among the right-wing populists’ voters. He explains this due to the development of globalised capitalism.

“We show that the losers of economic modernization actually abstain from voting, while those uncomfortable with cultural modernity support the extreme populist right. Even if we control for political preferences and a number of other factors, however, the over-representation of blue collar workers in the extreme right’s electorate persists. The working class by now appears firmly rooted in this segment of the electorate. While not being the social segment worst-off in post-industrial society, it has experienced a relative decline as compared to the postwar decades, making it receptive to the culturalist appeal of the extreme right.”

“As the two largest political parties; The Swedish Social Democratic Party and The Moderate Party’s stands on central issues have become more similar, it has given room to articulate and mobilise these forms of authoritarian views, which are behind the support of for instance Sweden Democrats.”

Return to the class struggle

So far the reply from the left has been to scold workers who vote for FN, Trump or UKIP. Even if they don’t say “deplorables”, like Hillary Clinton did, they mean it. If they aim to become relevant again, this attitude needs to be ditched immediately. The only way for the left to resume a relevant position and become a force against the globalised capitalism’s increasing exploitation, is to return to square one. As Simon Winlow, Steve Hall and James Treadwell say in “The Rise of the Right”:

“To us it’s obvious that the left must return to the working class. It is the working class that needs to win the struggle for social and economic justice. Middle class liberals neither can nor wish to win this fight on their behalf.”

Read also: The problem of the neoliberal left