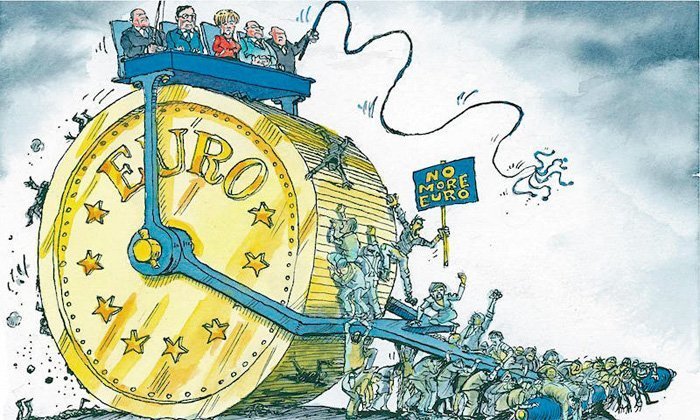 The British’ Brexit has exposed the widened chasm between the ruling, unelected EU elite and the European peoples over whom they reign. As Brussels was facing the defeat, the EU heads replied: The answer is not less Europe, but more. The German foreign minister Frank-Walter Steinmeier (SPD) and his French colleague Jean-Marc Ayrault have put forth a document stating that the answer to the EU crisis is more union and less national self-government. Actually, this is not new. It’s been the plan all along. This goes far back in time, long before the euro and the Lisbon treaty. Ever since the 1960s, European billionaires and their front politicians have wanted to create a European super-state with no nation states, with a common currency, one army and one government. However, they never had backing in any country for this plan, so they’ve had to carry it out in stages.

In 1977, the Belgian Viscount Etienne Davignon was Commissioner for Industry in EEC, as they called it at the time. He wished to create a supranational European state in order to give European capital a wider scope. He carried on the dream of Jean Monnet, the founder of the European Coal and Steel Community, which was the predecessor to EEC. Although being French, Monnet dreamed of a unified Europe led by The British. Davignon cooperated closely with Monnet as well as the Italian billionaire and owner of Fiat, Giovanni «Gianni» Agnelli. In 1977, Agnelli said that ‘the Davignon plan is a concrete example how to possibly surmount national interests and national politics.’ As the owner of Fiat, he controlled almost five percent of the Italian gross national product and was the wealthiest man in Italy’s modern history.

The driving force behind the Davignon plan was European big business’ need to solve the ongoing crisis in European steel industry. There was a surplus capacity and the competition was rock hard. The industrial capitalists needed a larger market and a united European policy to strengthen their position in the worldwide market. 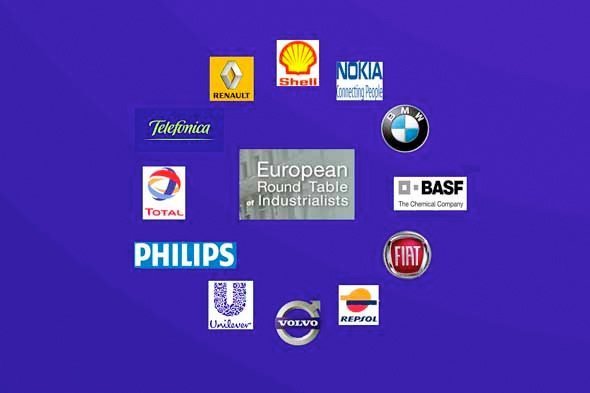 However, the integration stagnated. In the early 1980s, the EEC went through a crisis. Europe was losing to USA and Japan in the competition. By the initiative of the head of Volvo, Per G. Gyllenhammar and Etienne Davignon, 17 of the most powerful industrial capitalists met up in Paris in 1983. They agreed to establish what was to be known as The European Round Table of Industrialists (ERT). In several ways, it was their demands, reports and statements which lead to the EU we know today.

The industrial capital wanted a European market for capital, goods and services as well as labour force, preferably without any kinds of national regulations. They did a wall-pass – or rather; several – to Jacques Delors, who served three terms as President of the European Commission between 1985 and 1994.

ERT wanted to reduce the unit labour costs in the industry and they wanted to reduce workers’ benefits like insurance policies, medical plans, pension plans etc. They sought to accomplish this by getting rid of national regulations and replace them with common regulations and a free market economy in Europe. While Delors served as President of the European Commission, ERT provided inputs to what ended up as The Maastricht Treaty and the European Monetary Union and thus: the introduction of the euro.

The framework of a union

The Maastricht Treaty signed in1992 forms the basis of The European Union the way it appears today, but it also points directly forward to a joint European state with everything this will entail.

“An ever closer union” is a mantra of the European Union. All internal borders are to be deconstructed and eventually removed. The goal is a European superpower with one currency, one army and one government. Since Maastricht, the name was no longer EEC, but EU – The European Union.

Moreover, a joint policy for foreign affairs and security matters was coming up. The European Commission became a de facto “European government” – in spite of the fact that they had not been elected by any of the European peoples.

In fact, the people in the member states never ratified the Maastricht Treaty. Denmark held the first referendum on the matter in 1992. Those in favour of the union lost. Not by much, only by 50.000 votes, but they lost. In France, they won, but only with 51.4 percent of the votes, and this was considered a very weak win in one of the founding member countries of the EU. At this, the EU gave up the attempt to gain the peoples’ assent. They feared, and rightly so, that the plans in favour of a union would lose. However, that did not mean they were giving in.

The Norwegian Labour Party and the then Prime Minister Gro Harlem Brundtland decided the time was right to change the Norwegian “no” from 1973, so we voted again in 1994. To their great alarm, the supporters of the union lost – again! Norway said no, with a majority of 52.2 percent of the votes. However, Brundtland solved this problem for the capital forces by creating the EEA Agreement, which makes Norway a de facto member of the European Union and commits us to the “ever closer union”.

A main pillar in the plan for a European State was the introduction of the euro. This pillar was frail to begin with. Documents published by “Der Spiegel” in 2012 show that German, French and other top politicians in the EU countries were completely aware of the failure of the presupposed conditions for the euro project. The Spiegel called it “operation self-delusion”. They had access to numbers and reports showing this clearly. When the politicians still went ahead and supported the project, it was because it served their own political purposes, among them Helmut Kohl’s desire to be re-elected.

The former Chancellor of Germany, Helmut Kohl, said in an interview that he would never have been able to make the Germans accept the transition from mark to euro in a referendum. So he felt it was necessary to act “like a dictator” in order to push through and introduce the euro.

The defeats in France and The Netherlands in 2005

At that stage, the elite of the European Union gave up their attempts to gain the peoples’ support for their plans. However, that did not mean they shelved the plans. They merely carried on with business as usual – as if nothing had happened. The people were to be considered ignorant and backward.

That is why the five EU Presidents – unelected all of them – presented their plan to abolish the nation state parliaments in 2025, and that is why Germany and France replied as they did to Brexit. More union, less self-governing, less democracy.

Integration through culture and research – and bureaucracy

Huge amounts of money – billions of euros – now flow via the European Union as a matter of standard procedure. This includes money from Norway as well, due to the EEA system. More and more Norwegian culture and research projects have to look for economic support via EU. Moreover, in order to receive funding, they should document that their project contributes to European integration and the EU’s future goals.

This has created a rather large stratum of intellectuals who depend on EU projects in order to make their living and who have become accustomed to reproduce the EU system’s self-glorifying ideology. People in the media, journalists, scientists and scholars have developed strings of loyalty to the system and reproduce the European ideology.

In addition, textbooks and teaching material all over the European Union have been updated to the suitable eu(ro)phoric ideology to make sure the young generation end up as Euro-enthusiasts.

This has created a “eurocracy” offering lucrative jobs for bureaucrats and politicians receiving substantial salaries, generous benefits, daily allowances etc. 10.000 eurocrats have higher incomes than the Prime Minister of Great Britain. Moreover, it has created snug eyries for ex-politicians who can enjoy pleasant luxury without having to answer to bothersome voters. The Norwegian Thorbjørn Jagland*, with his tax-free 2.2 million income and his luxury villa in Strasbourg is the prototype of these kinds of people.

The entire system resembles the decadent Austro-Hungarian Empire; the way Robert Musil describes it in his unfinished novel “The Man Without Qualities”.

The immigration policy as part of the super-state plans

European Round Table of Industrialists wanted mass immigration in order to reduce labour costs, both direct costs (wages) and indirect costs (social costs). However, the free market economy with its free movement of the work force makes a difference in other areas as well. It contributes to weaken the nation states and thereby strengthening the union, and to the extent there are migrants from outside, it creates clients who depend upon the elite’s favour. This is a modern version of the patron-client relations in ancient Rome.

Peter Sutherland is former Chairman of Goldman Sachs International, he has served as European Commissioner responsible for Competition Policy and Founding Director-General of The World Trade Organisation. He has had top positions in BP, The Bilderberg Group, The Trilateral Commission etc. He was one of the driving forces behind the establishment of the Global Forum on Migration and Development, where he is now one of the heads.

He has stated as follows:

“…the European Union, in my view, should be doing its best to undermine… a sense of our homogeneity and difference from others”. Source: BBC

He is a strong spokesperson advocating massive labour force immigration to Europe as well as multiculturalism. Moreover, he does not think the EU should take into account the local citizens’ objections to this.

Sutherland’s first reaction to #Brexit was; “Somehow this result must be overturned.”

Goldman Sachs has been one of the main sponsors for the #Remain campaign along with other US banks like Citigroup, Morgan Stanley and JP Morgan.

This stratum has created their own vocabulary to describe those who oppose their plans. They call them nationalists, reactionaries, xenophobes, populists…

The plans for the superpower

“Today the parliaments of the EU countries pass their state budgets. Before 2025, supranational EU bodies shall perform this task. The national parliaments shall be granted “involvement” in the process.”

The plan consists of three parts:

* Establish a real European finance market. What is left of national obstacles shall be removed in order to let the capital flow freely.

This is a plan to abolish the nation state democracies in Europe within nine years, only to replace them with an aristocracy’s dominion of monopoly capital and top bureaucrats.

The French and German reaction to #Brexit is to speed up. Germany’s foreign minister Frank-Walter Steinmeier (SPD) and his French colleague Jean-Marc Ayrault have presented a nine pages long document stating that the answer to the crisis is “ever more union” and less national self-government.

“Daily Mail” writes about this plan and reports that it aims to deprive the member states of the rights to an army of their own, a penal code of their own, a fiscal system of their own, a national central bank, and instead transfer the control of all this to Brussels.

“The Express” reports that the plan has sparked panic and fury in Poland. In the foreword to the document, it states:

“Our countries share a common destiny and a common set of values…that give rise to an even closer union between our citizens. We will therefore strive for a political union in Europe and invite the next Europeans to participate in this venture.”

The banks’ politicians in Europe have not given in. Quite the contrary; #Brexit makes them even more determent to push through their dictatorship with no regards for the reluctant people all over Europe. In the eyes of the elite, the people are an uneducated, vulgar crowd, which must be led and governed by people like – the elite.

*Thorbjørn Jagland is a former Norwegian Prime Minister and former Chairman of the Norwegian Nobel Committee, which is responsible for awarding the Nobel Peace Prize. He is currently serving his second term as the Secretary General of the Council of Europe.