At the present time Syria is the war scene for several of the most powerful nations in Europe as well as for the USA and the Middle Eastern oil dictatorships. In addition we have the participation of Iran. Millions of people have been driven into exile, whole cities have been razed to the ground, hundreds of thousands have been killed or maimed for life. Only the most naïve and gullible amongst us still believe that this war is about democracy. It is not! It is about oil and gas, as I have explained at an earlier occasion. However, it is also about something else. What is this “something else”? What are the underlying reasons for this ongoing war?

Fear of the empty space

In the age of imperialism there has always been a struggle between the various powerful nations of the world. The struggle has been about access to the markets, to cheap labour, raw materials, energy, routes of transportation and military control. And the imperialis countries divide the world amongst themselves according to their strength and power. But the imperialist countries develop unequally. At one period England ruled the entire world, but the USA caught up with them and even surpassed them, and in some areas Germany has also managed to do so. The imbalance which now has arisen has created the foundation for a new partition of the world, so that it will reflect the current ratio of power. In the final analyses war is the method that imperialism makes use of in order to decide the outcome of this new partition.

When a nation collapses or loses its control over certain areas, its rivals will start to compete in order to fill the gap that ensues. Imperialism follows the principle which Aristotle in his treatise on physics called horror vacui – fear of the empty space.

In the 20th century we saw the unfolding of two gigantic wars which were both ignited as a result of this imbalance. The World Wars were both wars about territorial claims/hegemonies, about economy, about control – about new divisions of land ownership. After the 1st World War the nations in power met at Versailles to determine the new balance of power and the consequential new division of territories. The losers, Germany, Russia, Austria-Hungary and the Ottoman Empire, was decimated and partitioned. They were either rendered powerless regions or conquered ones by their victors.

The Balkan states, which had been governed by Austria-Hungary and the Ottoman Empire, became subsequently thus divided. Yugoslavia was constructed by the victors in Versailles. The Ottoman Empire lost all control of the Middle-Eastern regions and of those in Northern Africa, and the coast was cleared for England and France to enter the scene and share the bounty (spoils, loot) between themselves. We continue to live with this conflict that was a direct result of W.W. I and Versailles, notably the ongoing conflict in Palestine.

The victors after the Second World War met in Yalta in the Crimean Peninsula, where Roosevelt, Churchill and Stalin now decided how Europe was to be divided. All through the era of the Cold War both the treatise of Versailles and that of Yalta were in force. Neither the Hungarian rebellion (1956) nor the Soviet’s and their allies’ invasion of Czechoslovakia (1968) altered this pattern of dominance.

The Breakdown of the Soviet Union

The dramatic change happened at the beginning of the nineties. In 1991 the Soviet Union did not exist any longer, and soon the East European buffer states were a long-lost dream. Thus the balance was broken, which until then had supported the old order. And now a vast area of land lay ready for a new division. Russia had been weakened so that it barely could take care of its own territories, not to speak of the territory that previously had been governed by the Soviet Union. Never before has such a large territory lain open to appropriation. It was the result of two terrible wars that once more had come into play. This could only lead to war. 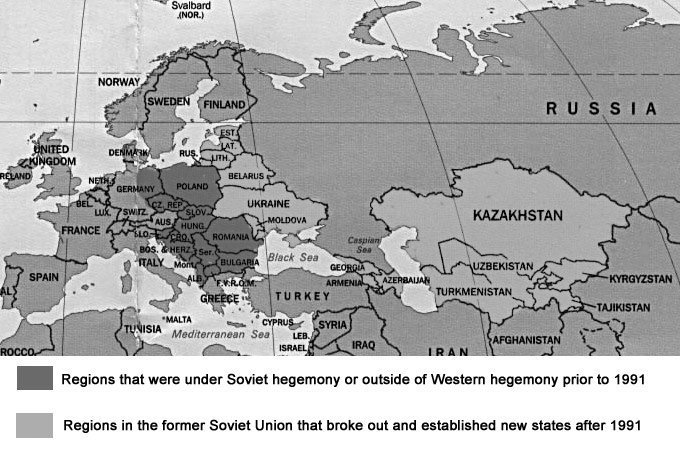 This lay the foundation for The U.S. Eurasian strategy, which is a plan for securing control over the whole enormous Eurasian continent. This struggle of appropriating new lands, primarily benefitting the U.S.A., is the struggle that is the basis for most of the wars since 1990: Somalia, the wars in Iraq, Libya, Ukraine and Syria. The U.S.A. has been active and in the forefront all along, and the battle for expansion of NATO towards the east and to cause changes of government in the form of “Color Revolutions” have been part and parcel of this battle. The coup in Kiev, the transformation of the Ukraine into an American colony partially tainted by Nazism and the war in Donbass also belongs to this picture. This war will not end until Russia is conquered and divided, or until Russia manages to halt the U.S.’s offensive.

But there were other racketeers at the same auction. First and foremost a mighty opportunity had presented itself to German imperialism, which certainly had experienced a serious setback in the period 1942-45. For one, it now became possible to take control over what, till then, had been the DDR. Also, it was now possible to advance German positions into areas which previously had been under their control. This especially applied to the Balkan States, and Croatia was particularly in focus. But their interest lay also in Czechoslovakia, Poland, the Baltic nations and the Ukraine.

It was Germany that ignited the wars of partition in order to split the Confederate Socialistic Republic of Yugoslavia. When Croatia declared its independence, Germany was the first country to acknowledge it. This became the factor that provoked what was to become the war between Serbia and Croatia (supported by NATO), the war over Bosnia-Herzegovina and the Kosovo War. All this was naturally presented as a war of liberation with Serbia as the Villain. But in reality these were wars dealing with imperialistic redistribution. This becomes quite obvious when we consider the miserable status these countries possess today. In Kosovo you have the gigantic American Camp Bondsteel base, but otherwise the country’s position is so miserable that people are fleeing from the place in droves.

German capital constitutes the greatest investors in Eastern and Central Europe, so much of the old influence has again returned to this region.

The Middle East and North Africa

The same thing happened in Somalia, which also had been a Soviet-ally.

Libya presented a special challenge, for Gaddafi was not only a mighty, nationalistic and secularistic leader. He also harbored the ambition of defying the U.S. dollar and rather create a united African monetary standard with the gold dinar as the common currency. This was asking for trouble from the “Empire”.

Israel had long wanted to crush its Arabic neighbors as well as Iran, and its only strategy was to support the American wars in the region in its hope of achieving its dreams of – gaining control over the region as far as to the river Euphrates.

As mentioned earlier, one of the losing nations from W.W. I was the Ottoman Empire. The collapse of the Soviet Union induced major Turkish imperialists to begin fantasizing of a grand Turkish empire ranging from Xinyiang to the Balkan states and from the Black Sea to the Arabian deserts. [See Pan-Turkism].

These ideas had already been proposed in the beginning of the nineties, but it wasn’t until the grand-Turkish chauvinist Recep Erdoğan entered the scene that these ideas have manifested themselves in concrete and aggressive politics. He sees himself in the role as Suleyman the Great, the prime ruler of the Ottoman Empire. In the southern part of the Arabian peninsula the “Guardians of the two Shrines” have developed similar imperial notions. Saudi Arabia wishes to reinstate its own version of the Caliphate, based on Wahabiism and the Sharia Laws. The plans these countries have developed are quite closely related, the one’s set of ideas enhancing or embellishing the others’. They refer to the same myths and the same historical defeats, and think they are benefitted by forming alliances in order to crush the powers that stand in their way, first and foremost Syria and Iran. Saudi Arabia is waging a war against its neighboring country Yemen, and is one of the main countries promoting Jihadistic terrorism in the world. This kingdom imports more weapons than any other country in the world. In Riyadh they have never forgotten how great their nation was in previous times.

The decapitators in Riyadh have spent hundreds of billions of dollars on a religio-political imperialism in the form of building mosques and Koran schools all over the world. In many ways the IS/Da’esh act as a special branch of the Saudi Arabian and Turkish armies.

The War in Syria is, amongst other things, Act 5 (or something similar) of the great War of Redistribution which began when the Soviet Union disappeared, and there is no reason to suppose that this will be the last.

Next article: The Desperate Fight for the Last Oil (and Gas)