Just after the fascist coup in Kiev in February 2014, I published a couple of articles in Slovak social ‘media in which I tried to analyze the consequences that this coup would have for the Ruthenian (Rusin) population in western Ukraine, and then particular for the part of the Rusin population living in Zakarpattia Oblast. I decided at that time to concentrate on public opinion in Slovakia, Czech Republic and Magyaria (Hungary), because these countries – for better or worse – had direct and close historical relations to this region and therefore were expected to have a greater ability to understand the dangers inherent in this development. 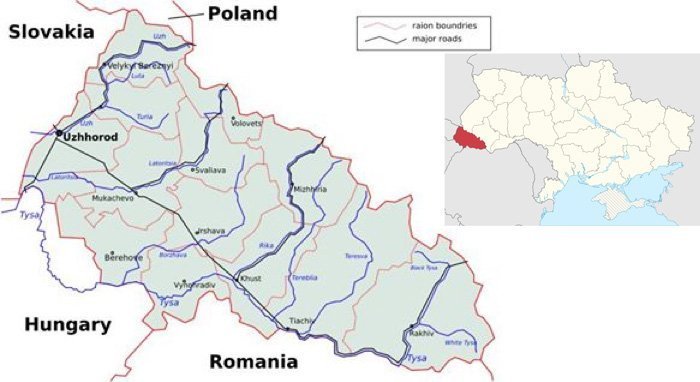 Meanwhile, I saw that Norwegian and Scandinavian activists which from the first moment captured – like me – an anti-fascist and anti-Nazi stance to the events in Ukraine, not at all viewed the Rusin component of this game. In fact Rusins as a national minority where not even counted with in Scandinavian analyzes. In the aforementioned Central European countries, however, the knowledge – at least among political activists, intellectuals and academics, should have all the background to see these dangers. But the response was discouraging passive.

But now – in July 2015 – has the Nazi gang – called «Right Sector» blocked outskirts of Zakarpattia second largest city Mukachevo, and are in combat with the police authorities in Zakarpattia. The Nazis now mobilize in western Ukraine, and threatens to create a military situation similar to that which already exist in the eastern Ukraine – but now also a new front just a stone’s throw from the Slovak and Magyar border.

Zakarpattia – what is it?

This «oblast» – or Ukrainian county, has since 1914 had many names. Before and during World War I it was a part of the Hungarian kingdom – and the Austrian-Hungarian dual monarchy. From 1918 until the end of March 1939, the area was the easternmost part of Slovakia – with a mainly Rusin population. However, in March 1939, Hitler gave Magyaria the right to occupy the area, and in addition the Magyars tried to occupy large parts of eastern Slovakia as well. But they were driven back by the Slovak army.
The Rusin, Slovak and Czech name of this region – or county – was then Podkarpatská Rus. And the fate of Rusins after 2nd World War was not settled; as often asserted, when the Soviet Union officially submitted Carpathian Rusinia as part of Ukraine on 22 January 1946. The fate was already settled in discussions between Prague and Moscow in 1945. Some say the early summer of that year. But the decision about Carpathian Rusinia was most probably taken already in the meeting of the London-based Czecho-Slovakian exile President Eduard Beneš and Jozef Stalin in the meeting between the two in Moscow in March 1945. The purely formal agreement; the Czechoslovak-Soviet treaty, was signed by Zdeněk Fierlinger and Vladimír Clementis from Czechoslovakian side – and from the Soviet side of Vyacheslav Molotov on June 29, 1945. A similar agreement was made between the Soviet Union and Poland on the huge Rusin population in Poland – known as the Lemkos.

Zakarpattia Oblast in southwestern Ukraine has today a population of 1,254,614, where Uzhhorod serves as capital of the county. The county is administratively subdivided in 13 Raions (districts) and 5 city-districts: Berehove, Chop, Khust, Muchachevo and thus Uzhhorod.
When Nazi storm troops now – initially – appears to concentrate about gaining control over Muchachevo, this must of course be looked upon in connection with that this city has been strongly objected to the mobilization of troops from their county to fight in eastern Ukraine, and that this city has a well organized Magyar minority which constitutes 8.5% of the district’s population and stand together with the Rusin majority which constitutes over 77% of the population. As does the Fort Russian population, constituting 9%, and the Carpathian-German minority of nearly 2%. There is also no reason to believe that the rest of the population in this county take a different position than Muchachevo. Let us remember that this county as late as December 1991 conducted a referendum in which 78% of citizens voted for the requirement of self-rule for the county. In this situation, the «Provisional Government of the Republic of Subcarpathian Rus» was established in Uzhhorod in May 1993 under the leadership Ivan M. Turianytsia.

This objective has far from waned after the fascist coup last year. The current Nazi mobilization seems to have two objectives: Total control of Zakarpattia – and as well over Kiev – if the government opposes control of this contradictory county. This opens up for some new questions: 1) Will two EU- and NATO- countries; Magyaria and Slovakia, sit and watch that the huge Magyar and Slovak minorities are slaughtered by the Nazis some few km from their borders? 2) What will then be the consequence towards Nulandostan which up til now has been supported by the EU and NATO? 3) Also, please note that Poland the last weeks has come with new signals about the situation in Ukraine – signals promoted by the reactionary-half fascist party «Prawo in Sprawiedliwość» and «Ligi Polskich rodziną.». This can signalize a turn where Poland’s own agenda now plays open out: Lvov back to Poland. The nazi-troops are now leaving the east, and it seems that their fight now will be concentrated on the western parts of Ukraina – and of course to gain control over Kiev.