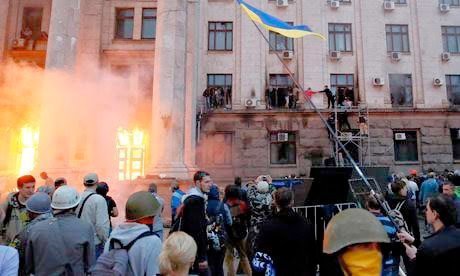 The overwhelming majority of the population of the U.S. is against being dragged into another disastrous war. Nothing is more dangerous than the aggressive U.S./NATO troop movements right on the borders of Russia.

Sending U.S. destroyers into the Black Sea and the Baltic Sea; scheduling threatening U.S./NATO war games and troop movements in East Europe; and imposing sanctions on the Russian Federation is a threat to peace on a world scale. We have seen the cost of past and continuing U.S. wars, which enrich the military corporations while impoverishing the targeted countries as well as poor and working people here in the U.S.

The years of U.S. funding of fascist forces in Ukraine and the recognition of a government in Kiev that overthrew the elected government, seized power and appointed extreme right-wing groups to head the police, army and national guard in order to pull Ukraine into NATO membership makes the U.S. complicit in the complete denial of the rights of the Ukrainian people. It is also a provocation against the entire region.

People in East and South Ukraine, outraged by this coup government, have attempted to resist the illegal junta, have declared an independent People’s Republic of Donetsk, and have called for referendums. In response, the right-wing coup government has allowed its military forces and other fascists to terrorize the Ukrainian people. In the most recent incident, some 40 people were massacred in the city of Odessa on May 2 by fascist militants, loyal to the Kiev government, who set the Trades Union Building on fire. In addition, 23 people were killed at Slavyansk and in Kramatorsk in the Donetsk region in attacks by Ukrainian military forces from May 2-3.

Despite mass desertions by Ukrainian police and military personnel, so-called “anti-terrorist” campaigns against activists in southeastern Ukraine were launched immediately after visits to Kiev by U.S. officials. Washington has spent $5 billion to effect “regime change” in Ukraine, helping to bring into power a junta dominated by fascist, racist, anti-Semitic organizations like Svoboda, Fatherland and Right Sector. Meanwhile, the U.S. has pledged up to $10 billion in loans to the illegal coup regime, and Washington has been instrumental in securing a $17 billion aid and austerity package from the International Monetary Fund.

This massive U.S. intervention in the Ukraine and ever-increasing campaign to surround and isolate Russia must end. I therefore demand:

1. That the U.S. government and all its public, secret, official and unofficial agencies immediately cease all forms of intervention in Ukraine, including ceasing all material and political aid to fascist and right-wing organizations within the country;

2. That all sanctions and threats of sanctions against the Russian Federation be dropped — sanctions are an act of war;

3. That U.S. military forces immediately be withdrawn from the Eastern European region and that NATO’s expansion and provocative actions against Russia be ended.

Tragically, neither the US nor the EU honored the February 21 compromise accord between the Maidan coalition and the Yanukovich govenment that was brokered by Foreign Ministers of France, Germany and Poland. It is upon the US government to save the honor of Western democracies as promoters of peace, legality and moderation. Return to the February 21 Accords before the hell of war breaks loose!