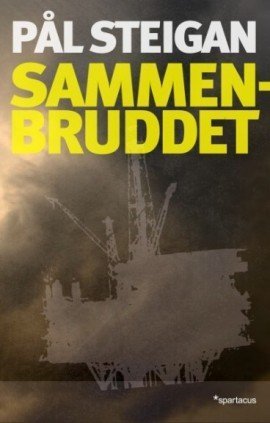 In 2011 I published a book in Norwegian under the title Sammenbruddet, The Collapse. I am preparing an English version for 2015. The book is divided into five parts:

Here is a brief summary of the first chapter:

By Pål Steigan
Translated from Norwegian by Guy Puzey

In the summer of 2007, the financial crisis became a fact. Capitalism will more or less find its feet again. But it will not get back to where it was. We have entered into a huge systemic crisis of capitalism.

The crisis that began in 2007 is, much bigger, deeper and more serious than any other crisis the capitalist system has come up against. Furthermore, it is taking place concurrently with two other crises. The first is the climate crisis, a ticking bomb beneath the global economy, and the second is an energy crisis, due to the world’s number one energy source, oil, being in decline.

At the same time, this was the age in which financial assets completely and totally took over control of the economy. The business model was to take up loans to fund other loans and, while this went on, the richest top executives were able to make billions in profits. Capitalism entered its casino phase.

The crisis of 2007-2011 started as a financial crisis, but the underlying weaknesses in the real economy gradually became visible. Above all, it is a crisis for the global economic system, with the USA as its dominant power.

In economic terms, the ‘War on Terror’ signified a dramatic militarisation of the American economy. The Bush era increased the wealth of the rich, especially the super-rich. There is a class division the like of which has not been seen in the USA for a hundred years.

The crisis, of which we have now only just seen the start, represents the collapse of the economic model that has dominated the world for the past couple of generations. After the stock market collapse came the crisis in the real economy. Those who will be hit hardest will be the workers and the poor around the world. This crisis will be prolonged, harsh and brutal.

There are no limits to how much the American state is willing to use from its society’s income in order to guarantee profit. Historians of the future will perhaps say that the USA’s long downhill retreat as a superpower began in the autumn of 2008. Previously, such falls have always been brutal, violent and destructive. There is little to suggest that it will be any different this time.

But we can raise an even bigger question. Is this the beginning of the end for capitalism, or will China and India see to it that capitalism is resurrected and, for that matter, made stronger than before? Back to Marx’s words from the Manifesto: ‘how does the bourgeoisie get over these crises? On the one hand by enforced destruction of a mass of productive forces; on the other, by the conquest of new markets, and by the more thorough exploitation of the old ones.’

The financial crisis is a pyramid scheme – a Ponzi scheme – in which imaginary values have been pumped up out of all proportion and, as in all pyramid schemes, it is those who started the pyramid who will be left with the profits when the whole thing caves in.

The section of the Norwegian oil fund officially known as the Government Pension Fund – Global, has been a major investor in the US capital market. Over the same period, Norway has grown to become a formidable exporter of arms.

The USA was once the leading car manufacturer. In 2009, China produced 13.8 million motor vehicles, while the USA only produced 5.7 million and was also clearly beaten by Japan. This is how simply the shift of power in industrial capitalism can be depicted.

Greece was the first country to come close to bankruptcy. In fact, this crisis is threatening the very existence of the EU. For Greece, as a state, the crisis is a disaster. The country has been deprived of its independence and has been put under the administration of the IMF and the European Central Bank. Production in Greece will probably drop, so how can Greece cut its state deficit as dramatically as the EU is demanding? The rest of the most troubled countries in the EU have been given a taste of the same medicine as Greece.

In the Hungarian elections in the spring of 2010, the fascist party Jobbik received almost 17 percent of votes. Right-wing populism and neo-fascism have been strengthened by hate and fear towards immigrants and by the old politicians’ corruption and incompetence.

Only now comes along an economic crisis the like of which Europe has not seen since the 1930s. In October 2010, 23.2 million inhabitants of the EU were unemployed. Four out of ten young people are without work; we are talking about a lost generation.
The EU cannot afford to let Greece fall, but neither can Germany afford to cover Greece’s losses. The only bright spot for the EU member states is that China has begun to buy up European debt. Some countries have more debt than their annual gross national product.

The EU has gone into an energy crisis that is only going to get worse, and this is happening in an EU already on the brink of bankruptcy.

In 2010, over 50 million people in the USA were not able buy enough food. This is an increase of 19 million from 1999. Hardest hit are Mississippi, Texas and Arkansas, and over half of those who are affected are black or Hispanic. In 2010, 33 US states and 7 cities were technically bankrupt.

The UN adopted their so-called Millennium Goals in order to plot a course towards reduced hunger and poverty, and for a few years there was some minor improvement. The financial crisis swept those results aside, and in 2009 alone the number of poor and hungry rose by over 100 million.

Class differences around the world have reached perverse levels, and yet there are still people who think that the concept of class is ‘old-fashioned’.

In 2008, the fortune value of the wealthiest fell, but it rose again dramatically already the following year. Their combined capital was as great as two thirds of the world’s GNP. This increase in wealth took place mainly through the financial market.

2011 was not only the year of deep crisis, it was the year of the Tahrir Square and the Occupy Wall Street movement. People rose to fight oppression, even at the risk of their own lives. And the Occupy-movement coined the phrase: We’re the 99% – you’re the 1%, which very accurately points out how finance capital has robbed the people all over the globe to accumulate those immense fortunes, while stripping ordinary people of the very means of life.

The English version will be updated with the new facts and developments – which actually confirm and underline the basic analysis of The Collapse.