Globalised capitalism has inflicted so many defeats upon the working class and people all over the world that it’s hard to give an account of them. Still, everything isn’t sad. In the middle of all this misery there are glimpses of light – if you know where to look for them. In fact, some of these bright spots come as a result of the misery, because they can be turned to our advantage.

Translated by Anne Merethe Erstad for the Norwegian original

The war on cash and the war on free speech

As previously shown through a number of examples, the international finance capitalism has specific plans to wind up cash as an option for payment. In India, this war on cash is led by the richest man in the world, Bill Gates, and his allies. Bill & Melinda Gates Foundation is a leading participant in the “Better Than Cash Alliance” along with Ford Foundation, Clinton Foundation, Citi Foundation, Omidyar Network (eBay), Coca Cola, USAID and the UN – among others.

In Norway, the Norwegian bank DNB has taken the lead. And since politicians in general are trained to do as financial capitalism bids, we can say with almost total certainty that legislation banning cash will be passed. If cash payment is banned by law, we will no longer have money. Or rather: we will no longer have any control over our own money. Whether we’ll be able to use them or not, will be decided by the banks and the authorities. We can no longer withdraw money from the bank and hide them under the mattress, even if the banks should introduce a five percent negative interest rate. And if the authorities decide that a certain person should be blocked from their account, they cannot buy as much as a bus ticket or a piece of bread. The totalitarian society on steroids.

This neo-fascism, or this post-democratic society – or whatever we should name this nightmare – is matched by the draconic legislations against so-called “fake news” and the introduction of public-private censorship bodies. As noted before, a militarisation of opinion formers worthy that of a dictatorship, is taking place. And it is happening without the slightest protest from those who supposedly support the freedom of the press and free speech.

Light in the darkness

And where do we find anything positive in all this, you may ask. A reasonable question, indeed. It appears dark as the night, like a dystopia by George Orwell or Albert Huxley. But watch closely, and you’ll find bright spots.

The cash ban will have extraordinary negative effects, but it will also force those of us in the resistance front to think anew. Our defensive struggle can no longer remain merely defensive. The enemy forces us to create our own currency. And they force us to organise collectively in new and interesting ways.

Alternative currencies are not as innovative as they may sound. There probably exist hundreds of them throughout the world, perhaps thousands. According to Wikipedia, Local Economy Trading Systems were particularly popular in the 20th century and the web-based encyclopaedia also mentions a large number of community currencies in the USA.

Co-operative movements and closely knitted local communities are among those who have gained the most from community currencies. The European fiscal cliff has led to the establishment of several varieties of local currencies in a number of communities all over Europe. It’s not very hard to imagine how a co-operative movement or a network of co-operatives can benefit from this. Like money in general, these currencies will express a certain value, which makes it possible to change one value into another. As long as the co-operatives only trade amongst themselves, they have no need for dollars, Euro – or Norwegian kroners.

A few years ago I watched a news story on Italian RAI 3 from southern Italy about a small, poor village where many Albanians had settled several hundred years back. This village had established a community currency with two values; one Che (Guevara) and one Skanderbeg (the Albanian national hero). According to the news report, this worked well for the inter-trading among the village people. In the village where I am an inhabitant, in Tolfa near Rome, we could very well have had such a local currency. Barter-economy still exists and could be developed further. In addition there are many local craft businesses. I haven’t carried out any serious study of this, but I wouldn’t rule out that one Euro spent at the bakery passes five pairs of hands in Tolfa before it leaves the village. We could call the currency collinaro, as those of us living there are called collinari: the hill people.

The southern Italian che and skanderbeg were most likely paper based. But there is nothing stopping these currencies from being electronically based. In Norway, the one who has performed the most extensive work in this area is Trond Andresen at NTNU (Norwegian University of Science and Technology). He has demonstrated how this can be accomplished, all the way from the local to the national level. Andersen has argued that this system can work on a national level for countries in a time of crisis. However, with a cash ban coming up, it would be even more relevant as a tool of resistance, as means to control a part of one’s own added value without the bank interference and to keep a part of our co-operation and inter-trade outside the surveillance files.

This means that the banks’ and the states’ abuse more or less forces us to organise collectively and produce samples of a future collective society.

This applies to the censorship on social media as well. Increased censorship and harassment will make Facebook and similar systems irrelevant for publishing and discourse. This will enforce solutions on the outside, alternative social media and new platforms. This is more problematic, because the strength of the Internet is the fact that it is a global productive force. But I am absolutely sure it is possible to find a way around this as well. My personal contribution in the near future is to launch a web based medium which will bring the experiences from this blog several steps forward. 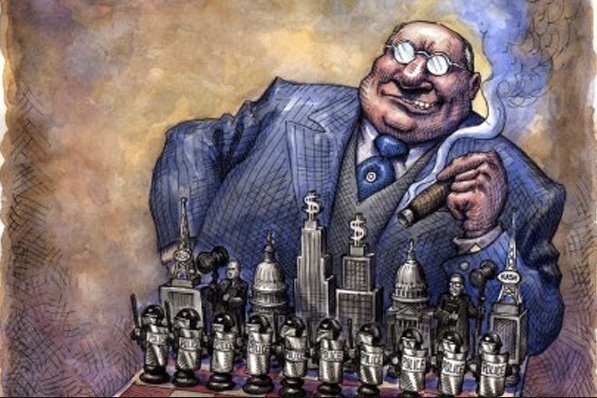 The 0.01 percent is extremely powerful, but obviously frightened

Those who benefit the most from the way global capitalism has developed, are the richest 0.01 percent. And among them, the ultra-rich “Masters of the Universe”. They are extremely powerful and some of them have personal assets exceeding entire countries’ gross national product. At the same time they are very few, and while they can buy whomever they want to defend them, the measures they are taking at the moment, above all the censorship, show that they are also very frightened. They know that if the 99 percent organise to fight them, they’re done for. When they cannot even tolerate competition from small blogs and alternative media lacking both money and power, they reveal their fear of rebellion and their fear of losing both power and capital. Their measures don’t reflect their strength, but their weakness, their panic.

These are very important lessons the ultra-rich have given us. A gift of which they are oblivious – they hardy understand what they have given away. And it is crucial to understand how this gift can be put to use.

This points even further, to a central element in what I have called Communism 5.0. It is a collective society where the producers control the means of productions – jointly. And there’s no need to wait for a revolution fifty or hundred years ahead. In fact, it is possible to start the construction of this future society now. We can start tomorrow. Collective interaction and organising around such projects will teach us to build a society and it will enhance people’s self confidence and trust in their own strengths. We’re not talking utopia. We’re talking about something we know can be done. And even more important: This has to be done, because the alternative is to be crushed beneath the weight of the ruling class’ power machinery. Some people dislike my calling it Communism 5.0, but that doesn’t matter. The Norwegian author Odd Eidem, once said: “Call me whatever you like. Call me the city tram!”

In this perspective, the 0.01 percent is not our worst enemy. They are few and they are frightened. We can handle them. Our worst enemy is our own feebleness, our own division and our own slave mentality. If we can liberate ourselves from this, we can save the world from the globalists and their gang.