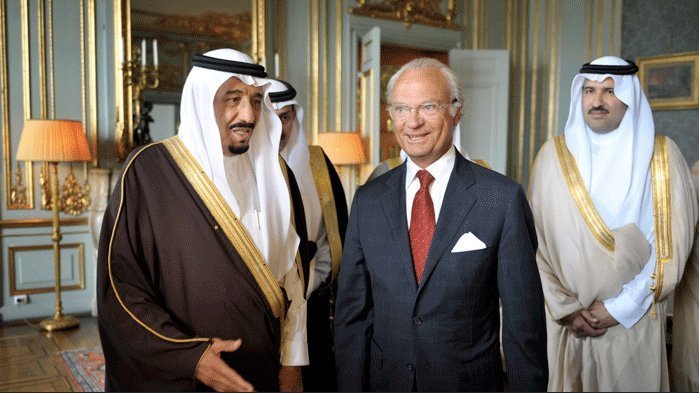 Today, on October 23, a Swedish delegation consisting of key government officials, led by PM Stefan Löfvén will meet their Saudi counterparts. The delegation also includes Marcus Wallenberg and Maria Rankka, chair and vice chair of «Saudi-Swedish joint Business Council». More importantly, Marcus Wallenberg is chairman of the board of SAAB, Sweden’s most important arms manufacturer and exporter. In essence, Sweden’s top political leadership and among the most important representatives of the arms export lobby of Sweden will meet the most heinous war criminals of our time to discuss issues of common interest, such as Sweden’s role as new member of the UN Security Council, as well as (arms) business opportunities.

To understand the current situation, a recap of the main events in the Saudi/Swedish entanglement is necessary. It dates back to at least 2005 when Sweden and Saudi Arabia concluded an agreement of «extended» defence cooperation, including the secret building of an advanced missile factory in Saudi Arabia with the assistance of Swedish expertise. The agreement was so sensitive that it was kept as a state secret, and an obscure front company was set up to hide the affair, which was nevertheless leaked to the public in 2012. The ensuing scandal killed the weapon’s factory project and lead to the resignation of the Swedish minister of defence. However, the abundant arms export from Sweden to Saudi Arabia remained «business as usual», as well as the extended defence agreement. This concludes phase one of the scandal, in Sweden denoted as the «Saudi Affair».

At the beginning of 2015, Swedish FM Margot Wallström criticised the Saudi flogging verdict of the blogger Raif Badawi. The Saudi/Sweden relations turned sour again. This happened at a sensitive time, because the «extended» defence cooperation program was due to a renewal for a new five years period. The government was split regarding the agreement, and rumours circulated that it would be cancelled. This led to an opinion article on march 6, 2015 in Dagens Nyheter, Sweden’s mayor newspaper where 31 of the most important actors in the Swedish private sector, including important members of the arms export lobby, lamented the possible cancellation of the defence agreement with Saudi Arabia.

The main message was that Saudi Arabia is Sweden’s fourth biggest export nation excluding Europe, that trade in general promotes mutual understanding, hence also human rights, that Saudi Arabia is better than its reputation and finally that Sweden’s «credibility» as trade partner would be at stake in the event of cancellation of the agreement. This appeal came too late, the game was driven by its own dynamics. Sweden cancelled the extended defence cooperation agreement. Saudi Arabia ordered its ambassador in Stockholm home, and let the Swedes understand that forthcoming business visa applications would not be honoured. This is the culmination of the phase two of the «Saudi Affair». 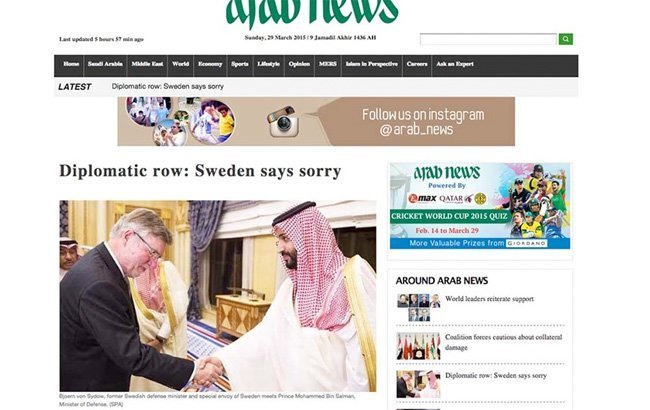 The Government is now in panic mode and calls for a crisis meeting with 40 representatives of the private sector. However, at this stage, unexpected help is offered from Above: His Majesty the King is worried about the situation and extends an offer to help. It turns out that the royal family has been of great help in earlier, similar situations.

On march 27, 2015, Björn von Sydow, former speaker of the Swedish Parliament, travels to Riyadh as special emissary of the Government. He meets with king Salman and deputy crown prince Muhammad bin Salman, and delivers two letters, one from the Swedish King, and one from PM Stefan Löfvén. These letters have not been disclosed to the public, but they had miraculous effect. The TV channel al-Arabiya stated the same day that the Swedish Government had apologised for Margot Wallströms statements, and that this had been accepted by the Saudis, whereupon the Ambassador of Saudi Arabia to Stockholm would be due to return. Furthermore, according to the same source, the Swedish King had emphasised the «Power in the Relationship» between Sweden and Saudi Arabia to his Saudi colleague, king Salman bin Abdul Aziz.

As for Margot Wallström, she has flatly denied that any form of apology has been extended. The credibility of that statement might be considered in the light of her statements to the press and to the Parliament: …We have expressed that we are sorry if feelings of misunderstanding have emerged. We also apologise for having spoken about Saudi Arabia and not to Saudi Arabia. We want a dialogue…

A minor detail has gone unnoticed:

Björn von Sydow met with the leaders of Saudi Arabia on march, 27, 2015. About one day earlier, as leader of a coalition of nine countries, Saudi Arabia launched a massive air assault upon its southern neighbour Yemen, under the name «Operation Decisive Storm«. The initial assault included approximately 200 aircraft.

The attack on Yemen was not sanctioned in the UNSC and was therefore in violation of International Law. Yemen had since long been plagued by a civil war with many actors, both internal and external. But the country, one of the world’s poorest, had not threatened any other country and represented no threat to Saudi Arabia, which is yet another reason for the attack being a crime according to International Law.

So, at the very same moment that Björn von Sydow bowed to the Saudi king and prince, abjectly transmitting the best wishes from the King and the Government, as well as their desire to develop good and strong relations with the Saudis, the latter had just started an unprovoked, heinous and illegal war of aggression against a poor country with 26 millions inhabitants.

In addition to the humiliation of von Sydow in Riyadh, what further price has Sweden been made to pay to remain «Royal Supplier» to the aggressive war machine of the Saudi dynasty? The answer is: SILENCE!

Since the Riyadh meeting at the beginning of the assault on Yemen, the Swedish Government has been totally mute regarding every and each atrocity and suspected war crime committed by the Saudis, as well as regarding any political initiative to criticise the Saudis or to stop the export of arms to them, whether the forum is The European Parliament, the UN or any other international or national institution.

The assault on Yemen continues unabatedly up to this day with endless war crimes been committed against Yemen’s population, by constantly attacking all sorts of civilian targets. In addition to this, a sustained policy of starvation has been imposed on the Yemeni population by means of a naval blockade, putting the lives of millions of Yemeni children at risk. One flagrant example is the heinous massacre on a funeral ceremony in Sanaa two weeks ago, which drew global condemnation (but not from Sweden) and renewed calls for an arms embargo on Saudi Arabia.

Such is the context in which the Swedish PM choses to have a chat with the Saudi Royal Family together with representatives from the Swedish arms export lobby.

In the press release published on October 20, announcing the visit to Riyadh, the Swedish Government states the following:

On 22–23 October, Prime Minister Stefan Löfven will visit Saudi Arabia to discuss bilateral cooperation, development in the region, Syria and other current issues.

On 1 January 2017, Sweden takes its seat on the UN Security Council. Top of the agenda is Syria, which is one important reason why the Prime Minister is travelling to the region.

«Saudi Arabia is an important political and economic actor with a key role in development and security in the region. The situation in Syria will be a priority issue during the talks. I also see good opportunities for greater exchange in areas such as innovation and sustainability.»

With respect to Saudi/Swedish contribution to «innovation» one might wonder if the killing fields of Yemen constitute a favourable testing environment for the Swedish products of Death.

When it comes to Saudi Arabia as an «…important political and economic actor with a key role in development and security in the region«, it is amazing how Mr. Löfvén confounds the solution with the problem, if he does not mean that the total annihilation of Yemen is among one of the means for increased security in the region. One cannot know, since he is mute on the subject.

Sweden want to promote itself to the world as a champion of human rights, peace, feminism, sustainability and all other things considered high civilisation. This week-end’s visit to Riyadh sets a new standard for the meaning of the word «hypocrisy», one which it will be hard to beat. Welcome to the UN Security Council, Sweden!