In 1990 a young girl offered a heart wrenching testimony to how Iraqi soldiers had forced their way into a maternity ward in Kuwait, how they’d destroyed the islolettes and left newborn and premature infants to die. She called herself Nayira. Her testimony made a tremendous impression and it had a huge emotionally impact in the first Gulf War against Iraq. The problem was, though: the story was a hoax. Nayira was the daughter of Kuwait’s ambassador to USA. Her testimony was produced by a PR agency, and what she told had no root in reality. Source: Wikipedia.

This story has everything. Young, crying girl, premature infants, barbarian soldiers. As Frank Zappa would have said: It is carefully designed to suck the twelve year old listeners into our camp.

As it turned out, the PR agency Hill & Knowlton, the oldest PR firm in the world, had created the manuscript, directed, styled and rehearsed the girl prior to her avowal. The testimony was designed to make Christian pacifists support the war against Iraq. (Hill & Knowlton used to work for the tobacco industry to undermine research proving damages caused by smoking. Currently they’re assigned by oil companies to undermine criticism of fracking and the dangers involved.)

A far more prominent case is of course the US Secretary of State Colin Powell’s presentation in the UN Security Council, where he submitted false “evidence” of Iraq possessing weapons of mass destruction. That too, was a fraud from one end to the other, but was reported by all major media more or less as the holy gospel.

This concerns the art of storytelling in war. Why are such stories important? Well, because our minds need stories to make sense of the world, to wrap our head around it. Facts and reasoning are important, but not enough. They must be attached to stories in order to work. Actually, our brain tends to reject facts and arguments that don’t reason with the story we believe in.

The story of Sybaris

In Ancient times, there were two Greek cities in southern Italy, at the “sole of the boot”. One was Crotone, the other named Sybaris. They were rivals. They were both founded around 700 years before Common Era. Sybaris amassed great wealth due to its fertile farming land as well as extensive sea commerce in the Mediterranean, and in Greece it became famous – or rather – infamous for excessive luxury and pleasures. The word sybarite, which still exists, became a byword for a hedonist; a person indulging excessive luxury. In 510 the city was attacked and looted by Crotone troops. Most likely Crotone used the myths regarding Sybaris to justify the attack. The word sybarite has survived as a negative – a story of the losers.

But there is another story to be found about Sybaris. It tells that the people in this city lived a good life and were not belligerent. What brought prestige in this city was to create an exceptionally tasty meal, and the wealthiest people rivaled among themselves to hire the best cooks. The fact that this story has not survived in the same way goes to show how powerful a negative story can be.

To most people in our cultural area and in my generation a number of negative images pop up in their mind when they think about Napoleon Bonaparte. One of them is the conception of him as a short man. But he wasn’t. Compared to the average height for men of his time, he’s supposed to have been of normal height, but when we think of him as a tiny little guy, it’s because British propaganda described him so – 200 years ago. This was a part of the story The British Empire used in its fight against their arch enemy. And again, it has proved highly viable.

Its how the brain works

There are numerous similar stories which have had little or no root in reality. But they have lingered still, because they’re imprinted in the collective memory. Of course one could say (and rightly so) this is because history is written by the victors. But there is another reason as well. Namely the fact that our minds need stories in order to make sense of a complex and difficult world.

Ever since olden times, people have gathered around the fireplace, telling each other stories. Tales of the origins of the family, the tribe, the clan – the people. There have been stories about heroes and villains, of golden ages and times of hardship – and everything else. But the stories have provided more than entertainment to pass the time. They have played a part in keeping people together, motivate and keeping up the standards, especially in hard times.

George P. Lackoff is an American scientist, a so called cognitive linguist. He claims that stories and metaphors are essential to the way we think and act. A conceptual metaphor isn’t just the use of a language tool in communication; it also molds the way we think and act. In the book Metaphors We Live By (1980) he and Mark Johnson describes how our everyday language is filled with metaphors we often don’t even notice.

The USA has some powerful stories that contribute to constitute the American identity and their conception of themselves. Just consider the strong impact of the word freedom in American rhetoric. Or all the stories featuring “rags to riches”: the idea that USA is the country where the shoe polishing boy can become a billionaire. In fact, this is basically another version of the Cinderella stories, which are very old and can be found in numerous versions in many cultures. In the real USA, social mobility is far less than for instance in Norway. But it doesn’t matter as long as most Americans, and quite a few Norwegians, believe the opposite.

The part of the dream machine

In this perspective, Hollywood isn’t merely an entertainment industry, but a collective dream machine working to sustain a self-perception and a storytelling that has expired by date in the real world, but still contributes to uphold society and faith in the future.

When the Berlin Wall fell, it turned out that millions of people “behind the Iron Curtain” had believed in these stories and wanted to be part of the American dream they’d had a glimpse of in the movies. This longing for the land of glory is essential for instance in the movie “L’America” (1994) by Gianni Amelio. It’s about Albanians following this very dream only to end up in a not very glorious country.

I remember encountering the opposite of this idea in what was then the socialist (and authoritarian) Albania. I happened to mention that in Norway, it was common for workers to own a car. I was abruptly interrupted by a socialist party commissar who claimed I was lying; this could not be, because workers in the West were oppressed and exploited. I tried to explain that the two things weren’t necessarily contradictive. But he refused to believe me. He had bought into the authorities’ story of The West. But below surface, beyond the reach of the party propaganda, the negation of the negation was alive. There it existed, not only the idea that The West was a good place, but that everything in The West was at least as good as portrayed in the most glorified Hollywood movies. 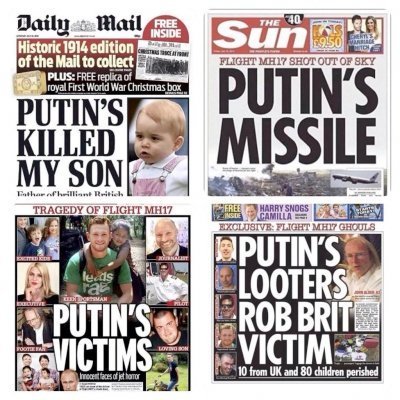 Not many hours had passed after the Malaysia Airlines MH17 had been shot down when the major mass media determined the guilty party:

There was no evidence proving that Russia had shot down the plane, and today not even Barack Obama says that it was Russia or Russian speaking rebels who shot down the airplane. Notice what he said on this topic during the G20 summit in Australia:

We’re leading in dealing with Ebola in West Africa and in opposing Russia’s aggression against Ukraine — which is a threat to the world, as we saw in the appalling shoot-down of MH17, a tragedy that took so many innocent lives, among them your fellow citizens.

Obama doesn’t explicitly say that Russia shot down the airplane, probably because he knows it isn’t true. But he trusts that his audience already has this story imprinted on their mental hard discs, and he needs only imply it.

This goes to show how important the battle of the story is, even in modern warfare. Wars are determined by weapons and relative strength, yes, but without stories they still don’t work. That is why the battle of the story is also a battle of a good first impression, which story will lodge in people’s minds. You don’t get many chances to make a good first impression. When accomplished, it doesn’t matter that much whether factual investigations a year later should show something else.

As such, the whole Ukrainian Maidan revolution was a Hollywood story. According to this story it was all about freedom loving young people rebelling against oligarchs and corruption, against an inhuman dictator. That the rebellion was in fact financed by some of the wealthiest oligarchs and the CIA, and that the oligarchs’ power as well as the corruption has, if anything, increased since the rebellion, doesn’t matter much for everyone who has bought into the story of Euro Maidan. I debate this with people who consider themselves democrats, and socialists, even – and they probably are – but they refuse to acknowledge the fascist’s strong position in Ukraine, even when they march with SS runes and hail architects of mass murders like Stepan Bandera.

The battle of the stories

In this blog I constantly try to go behind the authorities’ stories and undermine them. I do it partly because the stories are mendacious, but also because they are dangerous. Such stories can make people kill each other. The story of “Gaddafi who would kill his people” made Christian pacifists demand bombing in Libya. The story was a lie, which has been proven time and again, but it doesn’t help much as long as people believe in it.

My job is to do my very best to puncture the tales of the empire, but also, in time, to enhance alternative stories. Because the political battle cannot be won simply by presenting the best arguments. You also need the best stories.