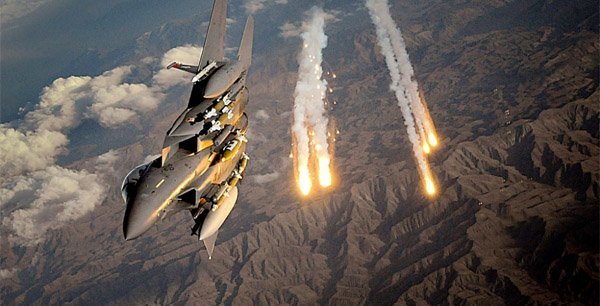 The US is a few “accidental” airstrikes away from total war with Syria. The US is reportedly working with Turkey to provide militants inside of Syria with radios to call in US airstrikes to help in their “fight against ISIS.”

Despite the obvious reality that these militants are in fact fighting alongside ISIS and are primarily fighting the Syrian Arab Army, and that such airstrikes are inevitably going to be called in on Syrian, not ISIS targets, the US is nonetheless attempting to assure the world this is not the case.

The London Telegraph declared in its article, “Moderate Syrian rebels ‘to be given power to call in US air strikes’,” that:

The US is planning to train some 5000 Syrian fighters a year under the plan as part of an effort to strengthen the fractured rebel movement against the government of President Bashar al-Assad and extremist groups.

The Wall Street Journal reported that the initial training would focus on helping rebels hold ground and resist fighters allied with the Islamic State in Iraq and the Levant (Isil).